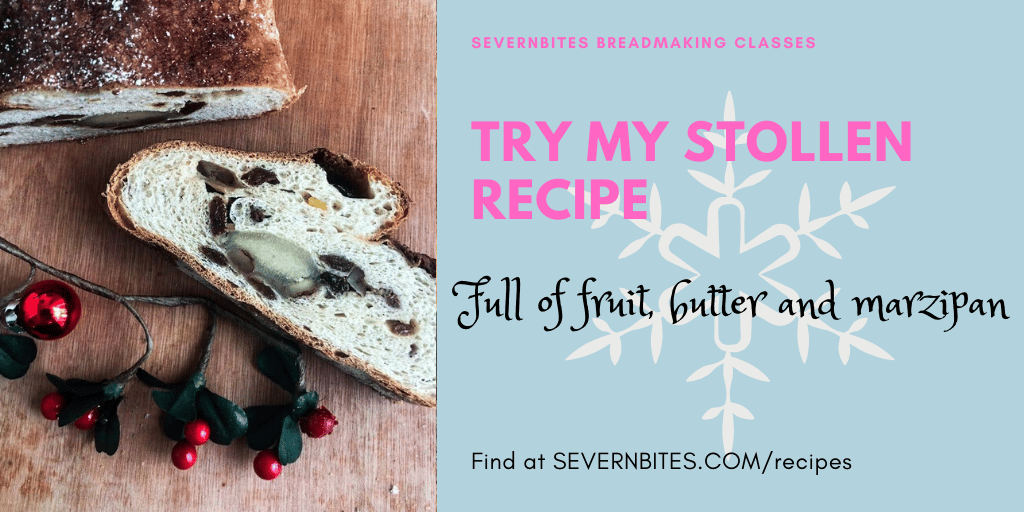 Why make your own Stollen? It’s a great seasonal treat with its light buttery texture great for those who are not so keen on Christmas cake. It also makes a wonderful present for a foodie. 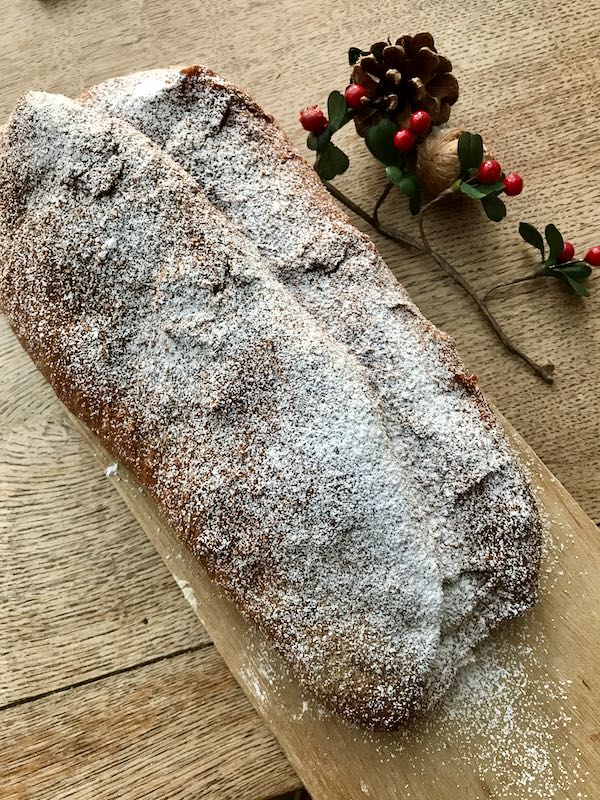 The word stollen means a post or boundary marker for a town. Stollen cakes have made for hundreds of years in Germany probably as early as the 1400s. The recipe has changed over the years to reflect availability of ingredients. It was originally made during the Lenten season when butter and milk couldn’t be used. Two men Kurfürst Ernst and his brother Albrech petitioned the Pope and the ban was finally overturned in 1647. So the rich, buttery bread that we know came into being. An enormous stollen was created in Dresden

Stollen was frequently baked in huge, long loaves. One over 18 kilos in weight and 5 feet long was presented to the King of Saxony in 1536. Later, in 1730, again in Saxony, a stollen “weighing 1.8 tons, 27 feet long and 18 feet wide and a foot high was to be the be the highlight of the Zeithainer Lustlagerfestival”. As you can imagine, a special oven had to be constructed to bake it in.

More recently Dresden bakers have created giant stollen. One, weighing in at 3000 kilos. The loaf was made up of 400 smaller pieces, each weighing eight kilos. Around 1.2 tons of flour, 750 kilograms of butter, 200 kilograms of sugar and 1.5 million raisins went into the stollen which took 60 bakers a week to construct.

Creating my version of Stollen 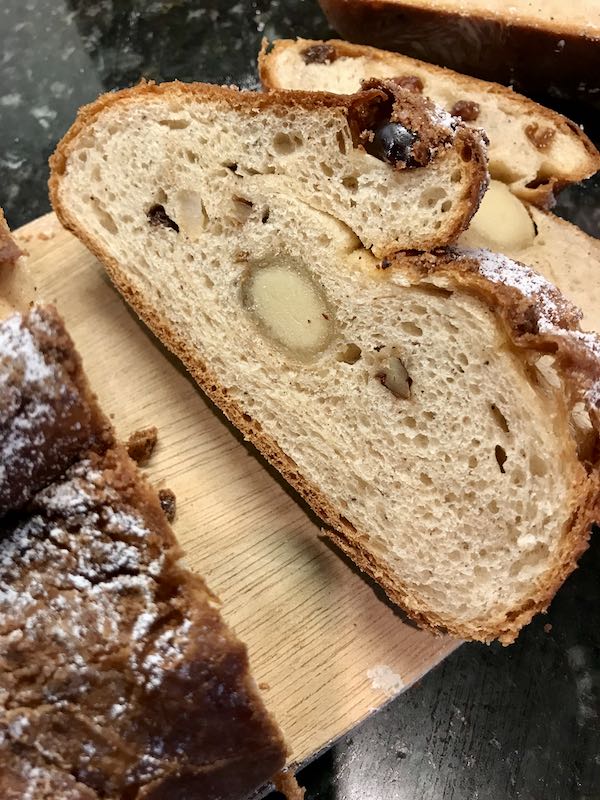 A slice of Stollen

We were particularly fond of the stollen made by German Bakery Falco in Edinburgh which appeared each year on their stall in Edinburgh’s farmers’ market. However, others we tasted were far too dry, possibly as they were made a long time in advance. What recipe should I choose? I was looking for a light tasty dough with just the right amount of fruit and marzipan. It should be soft and tender

All the recipes I consulted include dried fruit, butter (lots of butter) and are based on a sweet brioche style dough.

First of all I turned to my favourite book for sweet doughs, A Jewish Baker’s Pastry Secrets. From a Hungarian backgroud, George Greenstein ran his bakery for many years in New York (he passed away in 2012). I particularly appreciate his detailed descriptions of filling, icings and ‘sprinklings’. His brief introduction each recipe is deeply evocative. You can smell the bakes just from his description. The book however, has no photographs. Googling images is often necessary!

His recipe for “triple butter stollen” includes 10 egg yolks (gulp!) to a kilo of flour, 450 grams of butter (45%) and 1650 gr fruit (167%). This might just be going a little too far. However, his descriptions of how to make the dough, shape it and how to dose it with butter before and after are what I choose to follow. I also finish the stollen with cinnamon sugar at his suggestion.

I recently acquired Zingerman Bakehouse‘s cookery book and have been thoroughly enjoying working through many of the recipes. Their stollen recipe had just one egg and 330 grams of fruit to 365 grams (96%) of flour and 150 gr butter (41%). The use of rum butter to brush the stollen sounded a great addition. Just leave the rum out if you prefer.

I most closely followed Richard Bertinet’s stollen recipe. As with all of his recipes it is fuss free. He uses 4 eggs, 480 grams of fruit (48%) and 200 grams of butter to a kilo (20%). I added more spice, toasted pecans and added a roll of marzipan rather than the pieces he suggests. He also adds creme d’amande a mixture of butter, sugar, ground almonds and egg.

My version turns out to be light and delicious and a great addition to your Christmas delights. If you are a big marzipan lover you can add twice as much. Look for one with a high percentage of almonds in the marzipan you buy (some have only 20%). I used Odense Mandelmassa Almond Paste available through Ocado which has 50% almonds.

There are plenty of stages in this recipe which you can fit into your day whilst you’re working on other things. Enjoy making it! 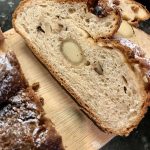 This recipe does have plenty of steps, but plan ahead and you'll find it simpler than you think. Once you've made the initial dough, you can leave it in the fridge overnight and come back to it the next day. This make 4 large stollen. The key is in the finishing, take time to dose liberally with butter and sprinkle with sugar.
Course Afternoon Tea, Dessert
Cuisine German
Keyword bread, Christmas, Stollen
Prep Time 45 minutes
Cook Time 25 minutes
Proving time 2 hours 45 minutes
Total Time 3 hours 50 minutes
Servings 4 Loaves
Author breadbakerdanielle

Why not try my Christmas Tear and Share Pesto Bread? 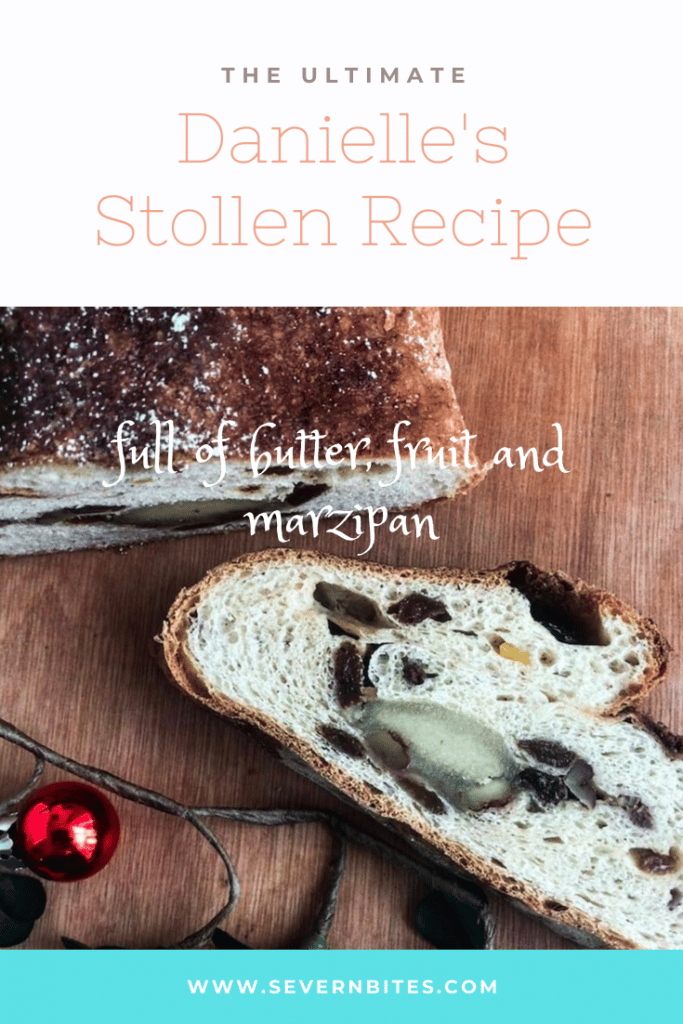 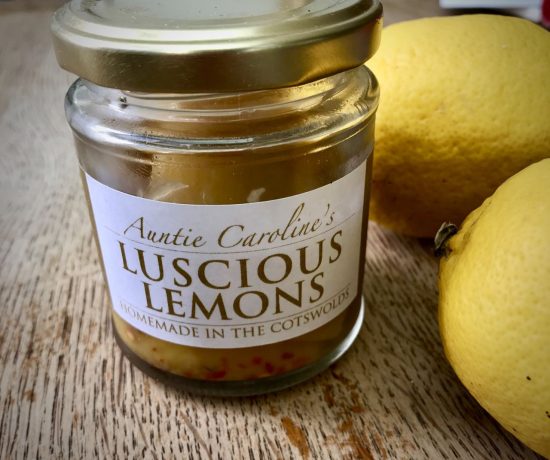 Get yourself in a perfect pickle 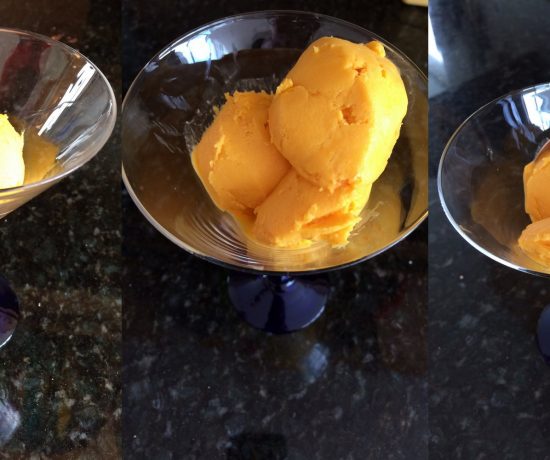 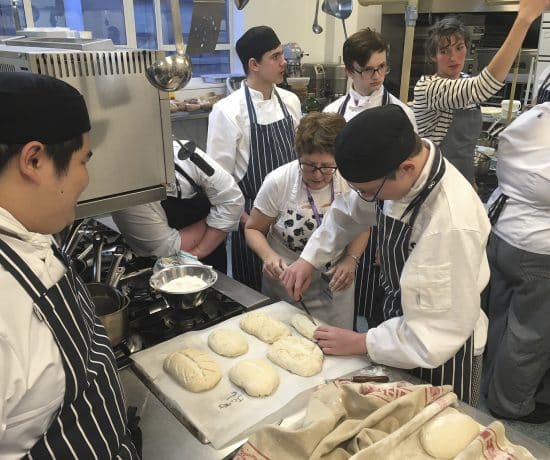