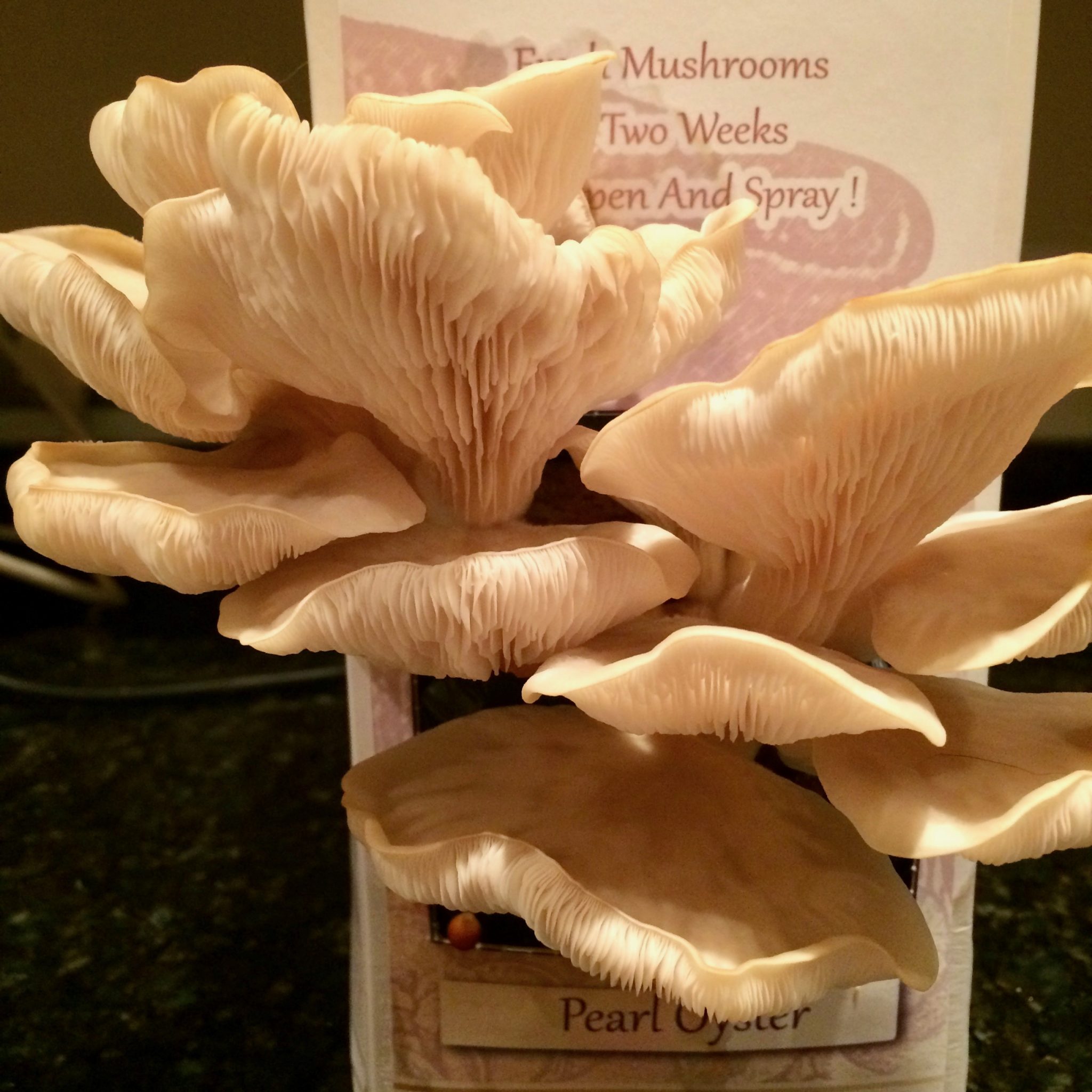 I think growing mushrooms could get addictive.

A few weeks ago we visited Feed Bristol a project run by the Avon Wildlife Trust in Bristol for a look at the business co-located on the site. One business, was growing mushrooms on a small scale. Imagine plastic boxes a good 90 x 60 x 60 cm seeded with various types of spawn. Some were located in a polytunnel under the benches and if you peeked, you could see some “sprouting”. We saw the amount of the hard work goes into making the medium on which the mushrooms will grow based on wheat straw.

If that was a small sized enterprise, what I have been doing must be micro sized, but none the less exciting. I’ve been growing pearl mushrooms from a kit provided by Imperial Mushrooms. Part of their business is providing spawn to mushroom growing fans, the other providing growing boxes such as this one – an ideal way to dip your toes into mushroom growing. Luckily it comes with everything you need including a nozzle you can put in to a plastic bottle to spray the wheat straw.

Mushroom growing is on the one hand about being patient, and on the other diligent. Once I set up the kit by simply slitting the bag, I had to remember to squirt the wheat straw within with water at least twice a day. I also had a quandry, where should I put the box that was cool and humid? In the end it went in the conservatory, which was probably rather too hot at certain times of the day.

After less than 2 weeks, the tiniest mushrooms began to appear and soon doubled in size each day. All too soon it was time to pick them.  And as a bonus, you get a second crop after a good soak. Just get into your spraying regime once more.  I have to report that they were delicious just cooked simply in butter.

Samuel Hubbard and his brother started their business after starting growing mushrooms as a hobby (there I knew it was addictive – D). They had trouble finding a mushroom company to buy from that had consistent quality, so they started producing their own spawn, spores syringes and mushroom kits. They are located in Shropshire so getting the materials they needed like wheat straw was easy enough as it’s produced locally.

Following very positive feedback, Imperial Mushrooms was founded in early 2016. The introduction of the mushroom grow boxes was so that anyone of any age could grow fresh mushrooms in the comfort of their own home with no previous growing experience needed.

The brothers are now working on expanding their product range and working with exciting new species of mushrooms.

Thanks to Imperial Mushrooms for providing the kit. You can purchase their kits from their Ebay shop. There are various types of mushroom kits to choose from priced from £15.95