Berkeley Square was established as a communal garden back in 1787. Today it is green and leafy and probably much as it was when it was built. On the day we visited students were lounging in the garden on a lovely sunny evening. Inside, our table at the Square Club Kitchen overlooked the garden. It was hard to believe we were in the centre of Bristol. 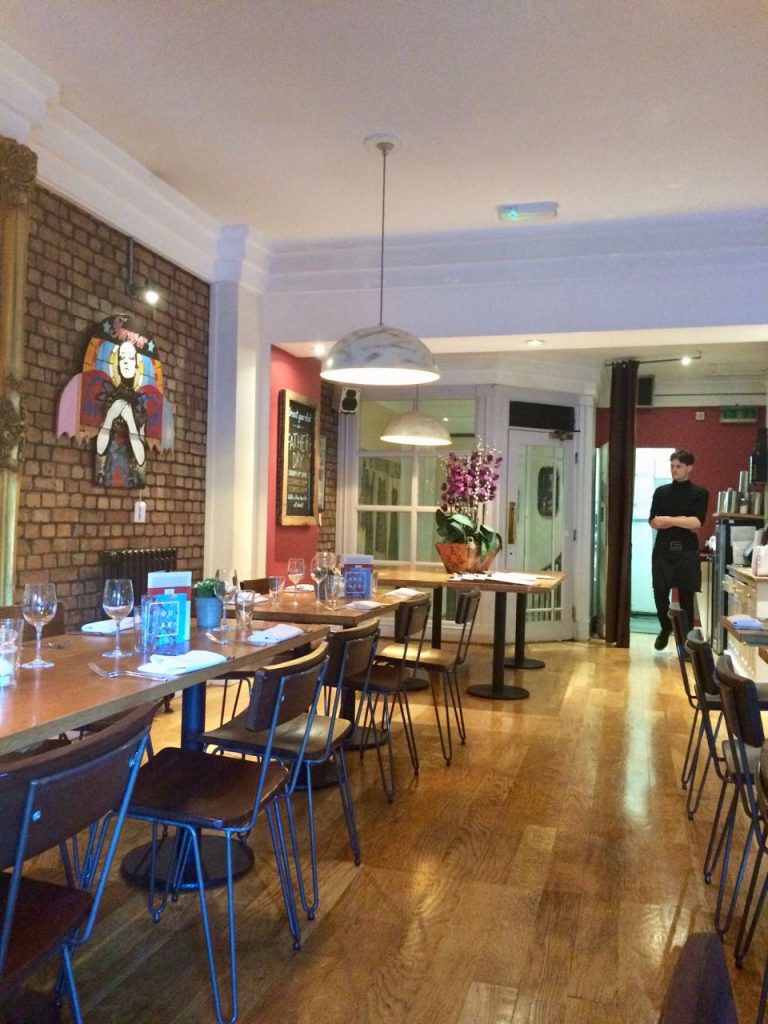 The Square Kitchen Restaurant, part of the Berkeley Hotel, Bristol a reasonably priced boutique hotel located in a beautiful Georgian building. The restaurant located on the ground floor and shares its facilities with the bar underneath. This functions as a private members club where depending on the day you might find a band playing, a novel nights discussion or a networking meeting.

The restaurant is a relaxing space with a suitably chilled sound track. Alas, on the day we were there, we were the only diners – but nothing like having a table for two with a personal chef! 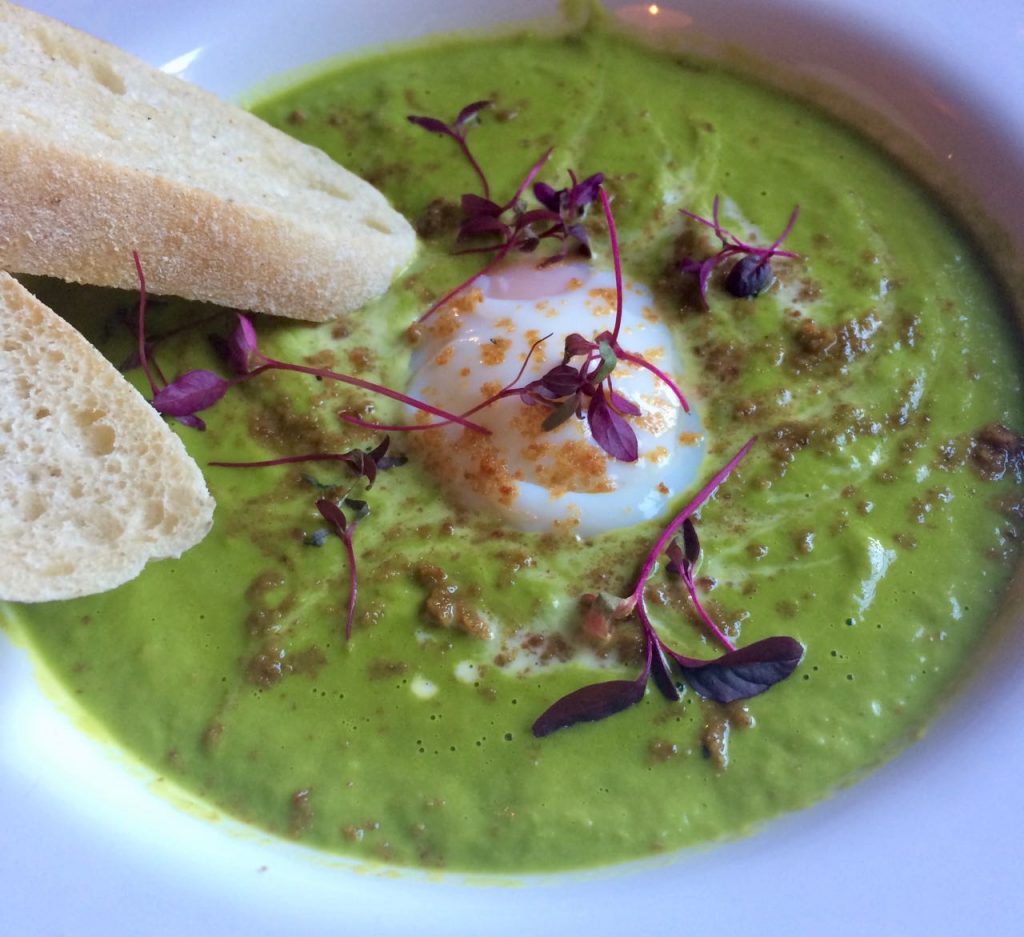 The menu reads well – there are plenty of interesting sounding dishes. As sous vide fans, we were intrigued by the 62ºC egg featured in a starter. Chef is obviously interested in a variety of modern techniques, using spherification in another. This is a process that creates sphere with a thin gel layer and liquid within.

For our starters, we chose wild garlic soup with the 62ºC egg and scallop and clam salad. 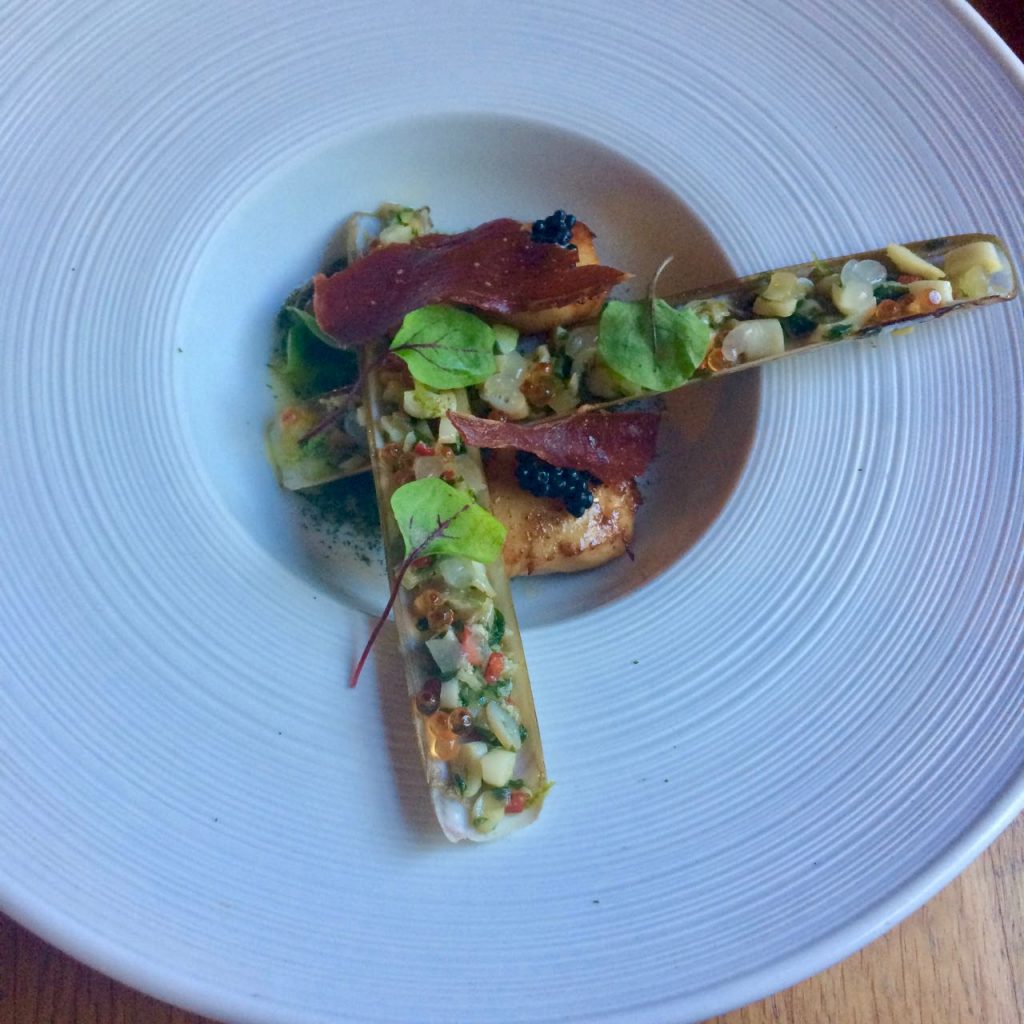 Using a sous vide machine (a water bath) to cook an egg gives you the ability to very precisely cook the egg. There’s been much debate about what constitutes the perfect egg – 65ºC is often mentioned. The appearance of the egg is much more satisfactory than a standard poached egg as the yolk stands firm and the white evenly cooked. Anyway, I digress. The wild garlic soup is mild and flavoursome, the egg perfectly cooked and a sprinkle of proscuito dust added a savoury flavour.

We weren’t quite expecting the clams to be razor clams. We love the name used in Scotland – spoots. If you’ve ever seen how they rise erupt, this name is very apt. Their long shells were used to hold the “salad”. The clams can be a challenge to cook as they turn rubbery, not so here. It was a lovely fresh starter including the lemon spherification – little bursts of lemon. 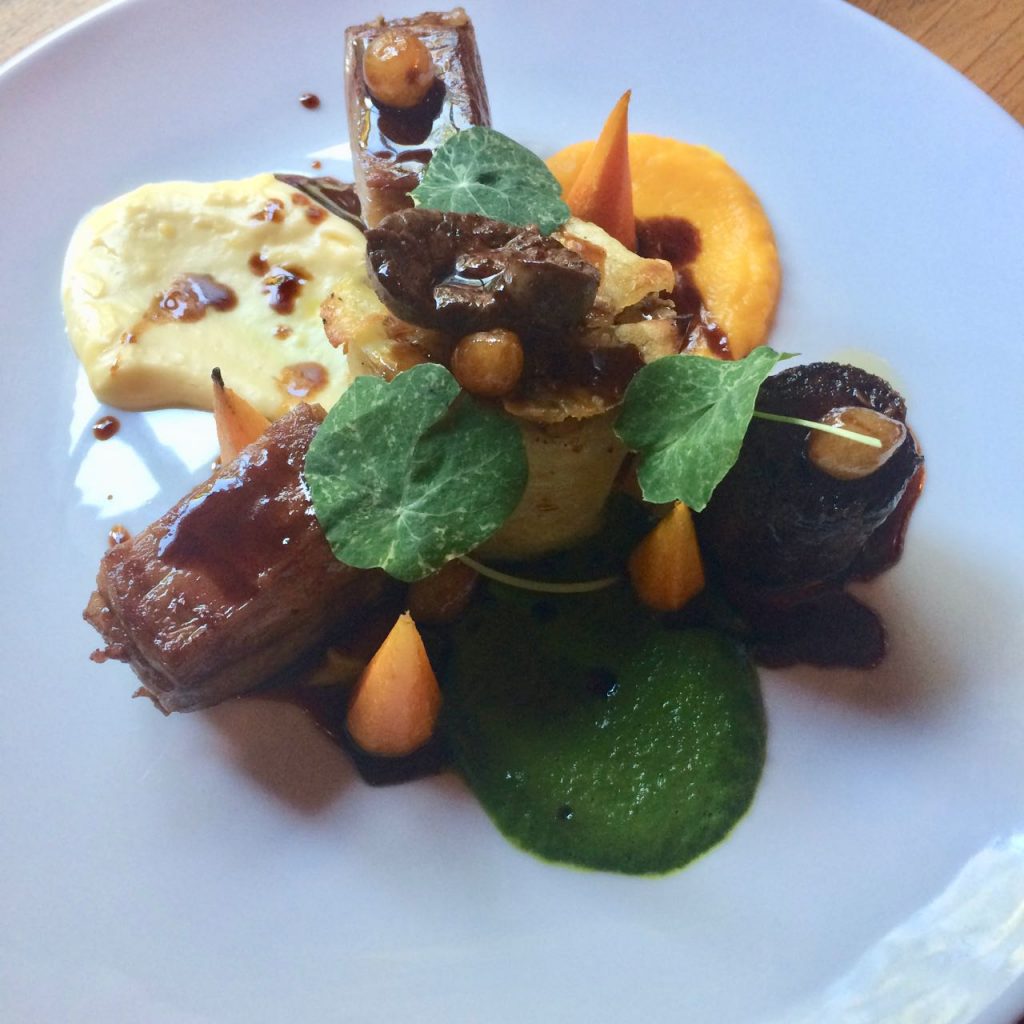 Whilst our starters were of the season, our main courses perhaps had more of a nod to winter. The assiette (or plate) of lamb included kidney, braised breast, fillet and loin with lamb jus. The stars of the dish were definitely the slow cooked breast and the jus. Some of the meat was a little tougher than we would have liked. 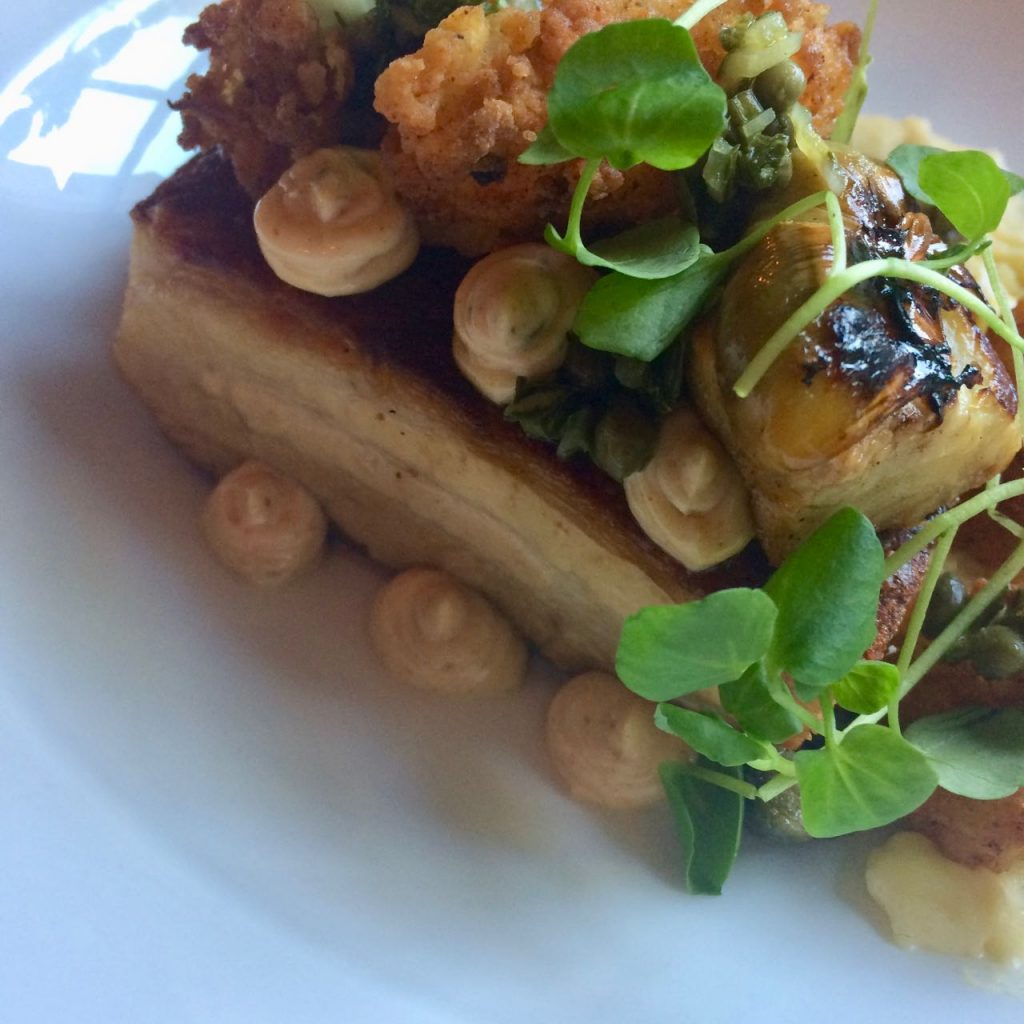 I had the pressed and slow roasted pork belly. This was very flavoursome with nicely crisp crackling. The crispy squid was pleasant. I wasn’t a fan of the white polenta. Looking like mashed potato I kept expecting it to taste like potato but of course it didn’t.

We could have ordered extra vegetable sides, but were glad we hadn’t as portions were generous. 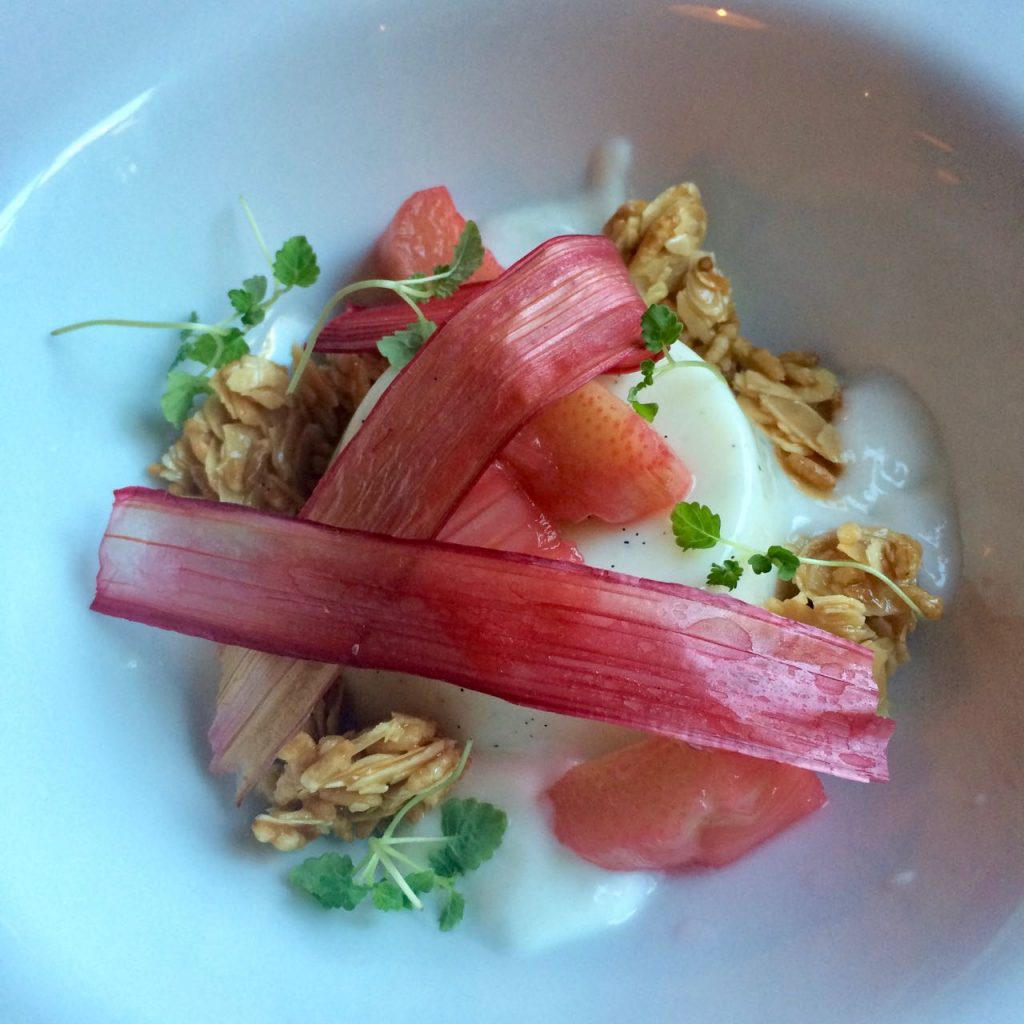 To finish, we chose vanilla pannacotta with rhubarb and a white chocolate and raspberry mille feuille.

My husband invariably chooses a mille feuille if it is on the menu. A prime example will have multiple layers of very flaky pastry usually in 3 layers filled with pastry cream.  Here the creme patissière was substituted with raspberries and white chocolate. The pink champagne really made the dish – smooth and really tasty. 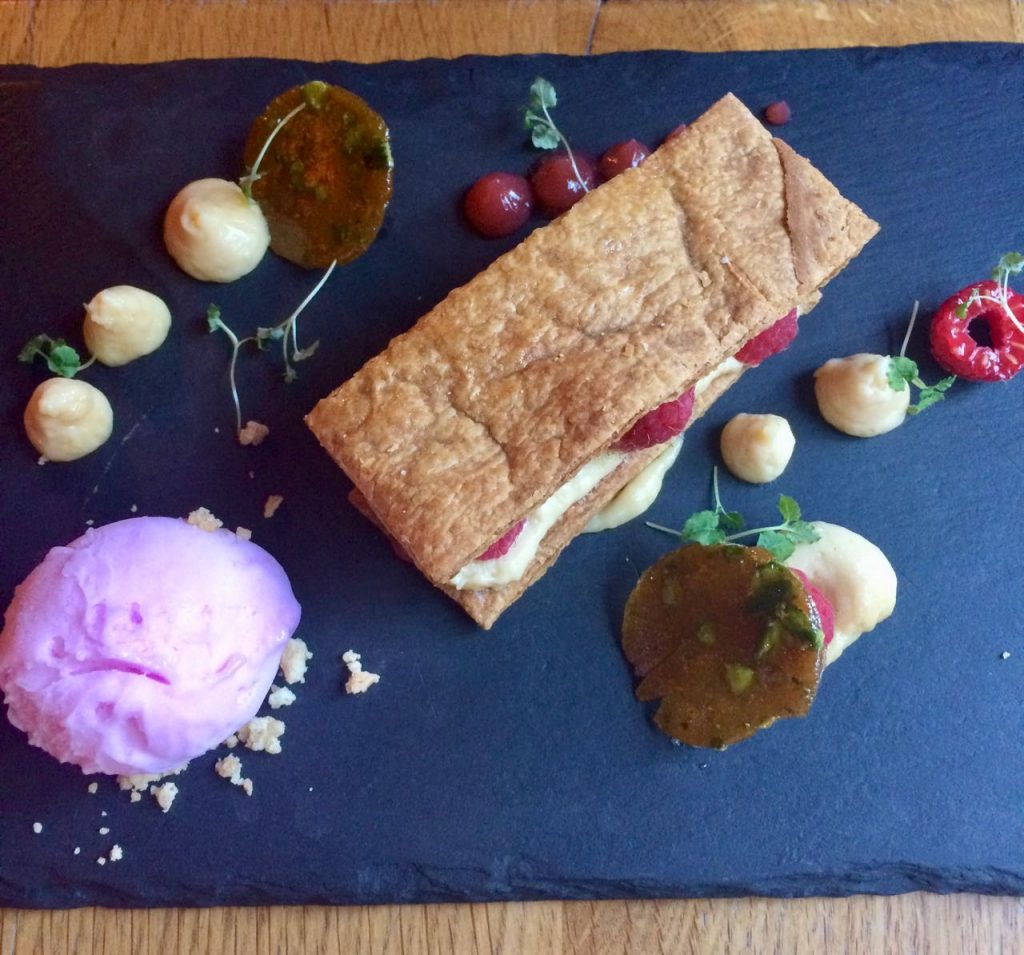 Mille Feuille with white chocolate and raspberry and champagne sorbet

Probably the prettiest dish to of the meal was my rhubarb pannacotta, topped with dehydrated slices of rhubarb and poached rhubarb. Creamy and tangy, need I say more

An ideal place for a date night or special occasion supper. We think the dishes could be simplified a little and still have that wow factor.

Expect to pay around £6.50 for starters and desserts and around £17 for mains. There are vegetarian options.

We were invited to review the Square – one dinner was complimentary. 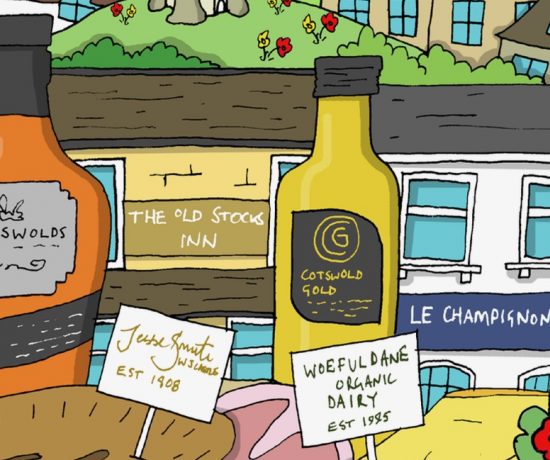 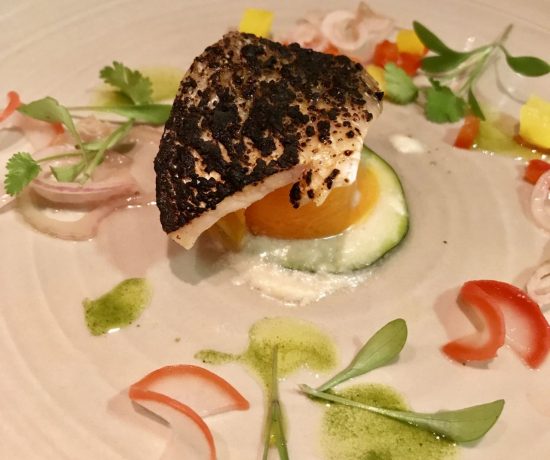 The Old Passage: Seafood at its best

Lunch at the Churchill Arms, Paxford