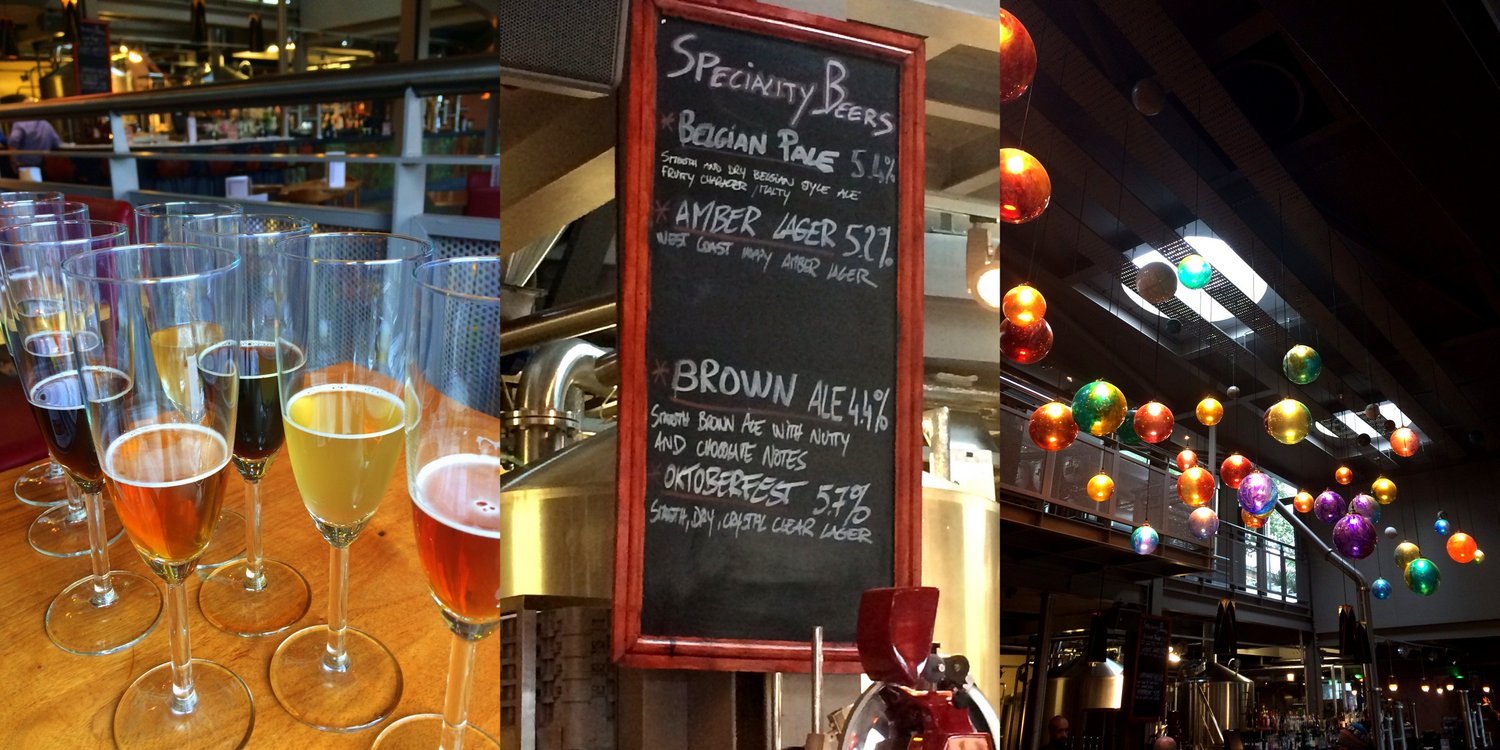 We don’t know Bristol well, and we managed to arrive at Zero Degrees by the hardest route, up two flights of the Christmas Steps. Somewhat out of breath, but a few calories down, we were ready to taste.

Zero Degrees was founded in 2000. Although microbreweries are quite common these days, at the time of launch they were rather unusual. Now each of the Zero Degrees venues (there are 4) has its own microbrewery. You could not get a fresher pint.

Just past the entrance are vast storage tanks of beers. Walk slowly and peer down and you can see right into the brewery. We missed all this on the way down as we were admiring the colourful lights and spacious layout and over to the right the pizza oven. I later discovered that 17 pizzas could be cooked at once – it is quite a size.

Soon our friendly server Ellis arrived with a flight of beers.Ã‚Â Zero degrees have 5 core beers that are always available and a number of speciality beers. Lunch ordered, we could get down to tasting.

Tasting the beers and a cocktail

The first thing you notice about the beers is the clean, fresh taste of each one. Each of the core beers has distinctive taste. We tried the Pilsner, Pale Ale, Wheat Ale, Black Lager and Mango beer. Each was enjoyed for its unique flavour. Our favourite was definitely the Black Lager but we could see us enjoying each on a different occasion.

Although designated a lagerÃ‚Â the black lager’s flavours were what you might usually find in a beer: roasted and caramelised malts with chocolate and coffee flavours. The mango beer was unexpected – one for those who don’t usually drink beer perhaps. Light, refreshing and fruity. It’s even an ingredient in one of their cocktails.

The speciality beers available on the day we visited were Belgian Pale, Amber Lager, Brown Ale and Octoberfest. These beers were somehow not so distinctive as the core beers. The standout one was the Octoberfest.

My husband proceeded to finish the samples in the order that he rated them very happily. There’s a really good selection of cocktails too if you’re not a beer fan.

Pizzas are definitely a “thing” at Zero Degrees. You can choose from a vast range from the standard margarita to peri peri chicken and toppings from all over the world in between. Kilo pots of mussels and sausages also feature. Useful symbols against many menu items suggest the best type of beer to complement the food. Ã‚Â I plumped for a Moroccan Salad, my husband Teriyaki Chicken.

Our food arrived. For such a large and eclectic menu, you might be worried about how the kitchen can do justice to all the dishes. WeÃ‚Â were delighted with our dishes. I thought I’d never finish such a large portion of my Moroccan Chicken Salad, but the mixture was perfectly judged and flavoured that I enjoyed every bite. Additions of dates and toasted almonds to the moist lightly seasoned chicken made the dish special. The Teriyaki chicken is listed under the pasta menu. It arrived garnished with a large (hot) chilli. There were plenty of vegetables mixed in with the noodles and generous portion of chicken. Additions of cashew nuts and coriander added more texture and flavour.

Who should eat and drink at Zero Degrees?

We visited at lunchtime mid week. There was a mellow soundtrack and diners ofÃ‚Â all ages. We hadn’t been sure what to expect but definitely discovered a relaxing place for lunch. We’ll be back.

Danielle was invited to try the beer flight at the invitation of Zero Degrees.