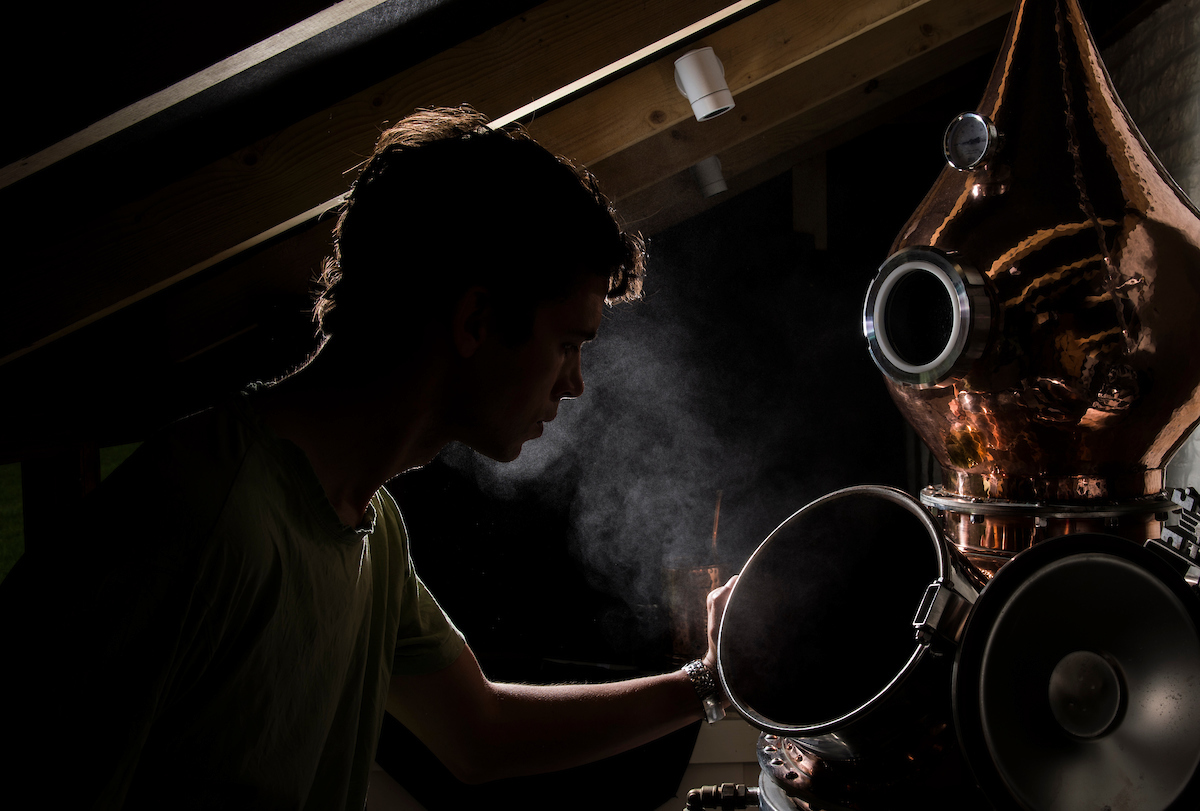 Drive down an ordinary road in Cirencester, park and walk down the path to Capreolus  distillery (Capreolus is the latin name for a roe deer). To one side is the area where the ingredients are processed. On the other side is the distillery itself. It’s housed in the lean-to greenhouse of Barney Wilczak’s childhood home. The garage is now designated a bonded warehouse – there can’t be many of those in Gloucestershire.

The quantities of fruit needed are large and when the fruit arrives it has to be processed immediately. However, it is difficult to schedule exactly when a delivery will be made. Barney is absolutely adamant that the fruit should be used when it is ripe and this can even be down to the hour that it is at peak perfection.

As you can imagine this leads to tons of various fruits arriving almost at the same time and each takes hours and hours to prepare. The fruit might be an old perry pear or elderberries or a particular type of local plum. The final yield can vary greatly. He might achieve 30 litres of alcohol from apples or as little as 9 litres from another fruit.

Compare this with a ton of barley (for whisky) and you are looking at a yield of 450 litres of alcohol whereas takes up to 450 kg to make each litre of finished eaux de vie.

Barney makes eau de vie and gin. If you’ve not come across eaux de vie (sometimes called fruit brandy) on your travels across Europe, you really have been missing out. Eau de vies are created by distilling fruit. The result is a beautifully concentrated liquid which is usually colourless. If you appreciate a good malt whisky, you will love a Capreolus eau de vie. The flavours are complex and if you add a touch of water as you would to cask strength whisky, the flavours expand and evolve. One apple eau de vie is aged in mulberry barrels which gives it a subtle smoky flavour.

Barney’s copper still was custom made in the Czech republic. It incorporates a bain marie – a water bath – which means that the distilling can be kept to a very precise temperature. There is a real art in knowing the exact point at which the distilled product is at its best – a few seconds can make all the difference.

Before starting the distillery,  Barney worked as a photographer focusing on conservation issues. His knowledge of local plants grew. When he started to plan his Garden Tiger gin – the Garden Tiger is a moth – it was important to create a gin that was unlike any other. Over many months, he whittled down over 70 botanicals, split into 6 flavour groups down to 34. Unlike the fruits for the eau de vie which are all grown within 40 miles of Cirencester, Barney sourced Tarocco blood oranges one of the 34 botanicals from Sicily.

When the gin is being distilled not only are the botanicals steamed in the top of the still, some are soaked in the liquor. The resulting flavour of the gin is gorgeous. It’s in some ways reminiscent of the flavours of Cointreau and utterly unlike any other gin you’ve tried – the flavours are complex and keep evolving.

After launching the distillery only a few months ago and after nearly 3 years preparation, Capreolus Distillery gin was been judged Spirit of the Year by the Whisky Exchange and Michelin starred restaurants are queuing up to stock the eau de vies. Do seek them out. You can purchase some at the Jolly Nice farm shop between Cirencester and Stroud or buy online.

All in photographs in this article are copyright Barney Wilczak

1 thought on “Capreolus Distillery – Prepare to be amazed”