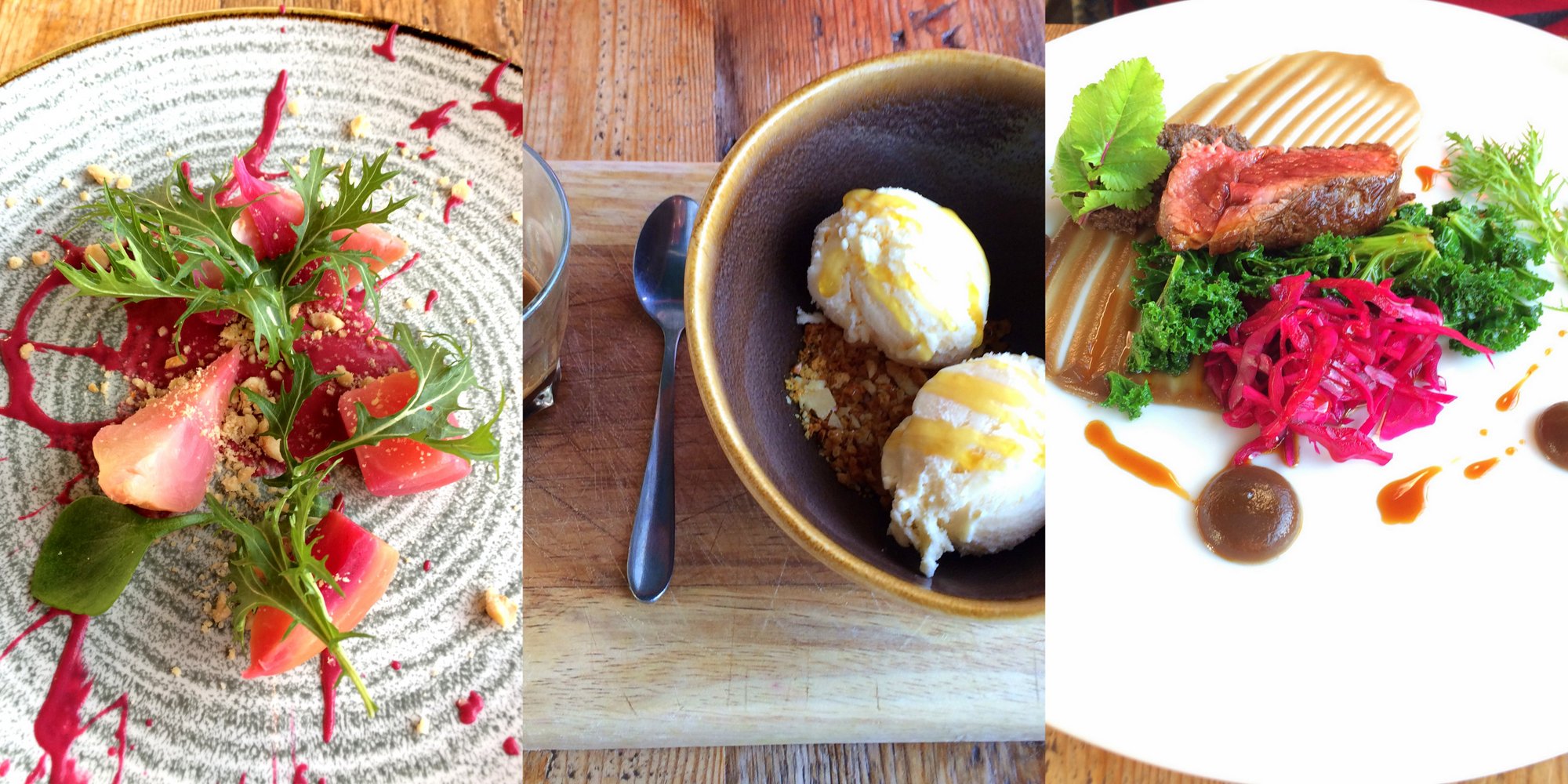 In that peculiar time between Christmas and New Year if you are lucky enough not to be working, deciding what to eat can be difficult. You know you still have oodles of turkey and perhaps mincepies and pudding to finish up, but you are looking for something fresh and tasty.

We set off for lunch at the Ethicurean not that far from Bristol airport, Ã‚Â on a crisp, beautiful day. The restaurant is perched at the top of a hill with what must be quite a view but it was wreathed (rather beautifully) in mist.

An ethicurean is a person who attempts to combine ethical food consumption with an interest in epicureanism, eating ethically without depriving oneself of taste.

You can walk up through the walled garden which is sloped. Even at this time of year there are plenty of vegetables growing. The restaurant shuns mass production and aims to use as much from its garden and  local produce as possible.

The restaurant is located in what at one time would have been the greenhouses for the walled garden. It’s a welcoming space. Any decoration is rustic and slightly rough around the edges and is charming.

Perhaps we should start reviewing the music played at restaurants? This soundtrack was as mellow as the ambiance. Despite the cold outside we gently toasted in the sun streaming through the windows.

There is a light bites menu, but we headed straight for the set lunch, with 3 choices for each course.

The Welsh Rarebit also features on the light bites menu. How long is it since I’d eaten one? I can’t remember. It’s delicious comfort food. Rather than tuck into any more of my husband’s starter, I focused on my beetroot and goats cheese. The beetroot were perfectly cooked, not too soft, not too crisp and served with the cheese as a sauce rather than a “lump”. Delicious.

We both chose bavette steak as our main dish. This cut is also known as flank steak. It’s less tender than fillet, but much more flavoursome.

Each separate element brought different textures to the dish. The long cooked ox cheek was soft, the pickled cabbage crunchy. But the stars of this dish were the jus and the kale. If all kale could taste like this, gloriously buttery steeped in the jus, I’d eat it every day.

Of course we had to have dessert. My husband chose Somerset Affogato with clotted cream ice cream and Barleywood honeycomb – you could really taste the tang of the cream. As a big cardamom lover, I went for the pear, chocolate and cardamom sponge – warming flavours. .

This is a relaxed welcoming place we will definitely return to.It’s a beautiful setting in Winter, what will it look like in Summer? The staff are lovely and are knowledgeable.

Having tasted what they do with vegetables, we are very tempted to try the vegetarian tasting menu held on Tuesday evenings.

We haven’t mentioned the drinks, but the Ethicurean is making its own vermouth. I only realised this after I ordered another cocktail – maybe next time?

A small gripe, the size of the Welsh Rarebit was rather large for a starter. It really dwarfed my starter, perhaps a half sized portion would be better?

Find out more about the Ethicurean

The restaurant has been rated as one of the Top 100 restaurants in the Michelin Guide 2016. The menu changes daily. Three courses are £32.

9 thoughts on “The Ethicurean Restaurant: good food with a conscience”