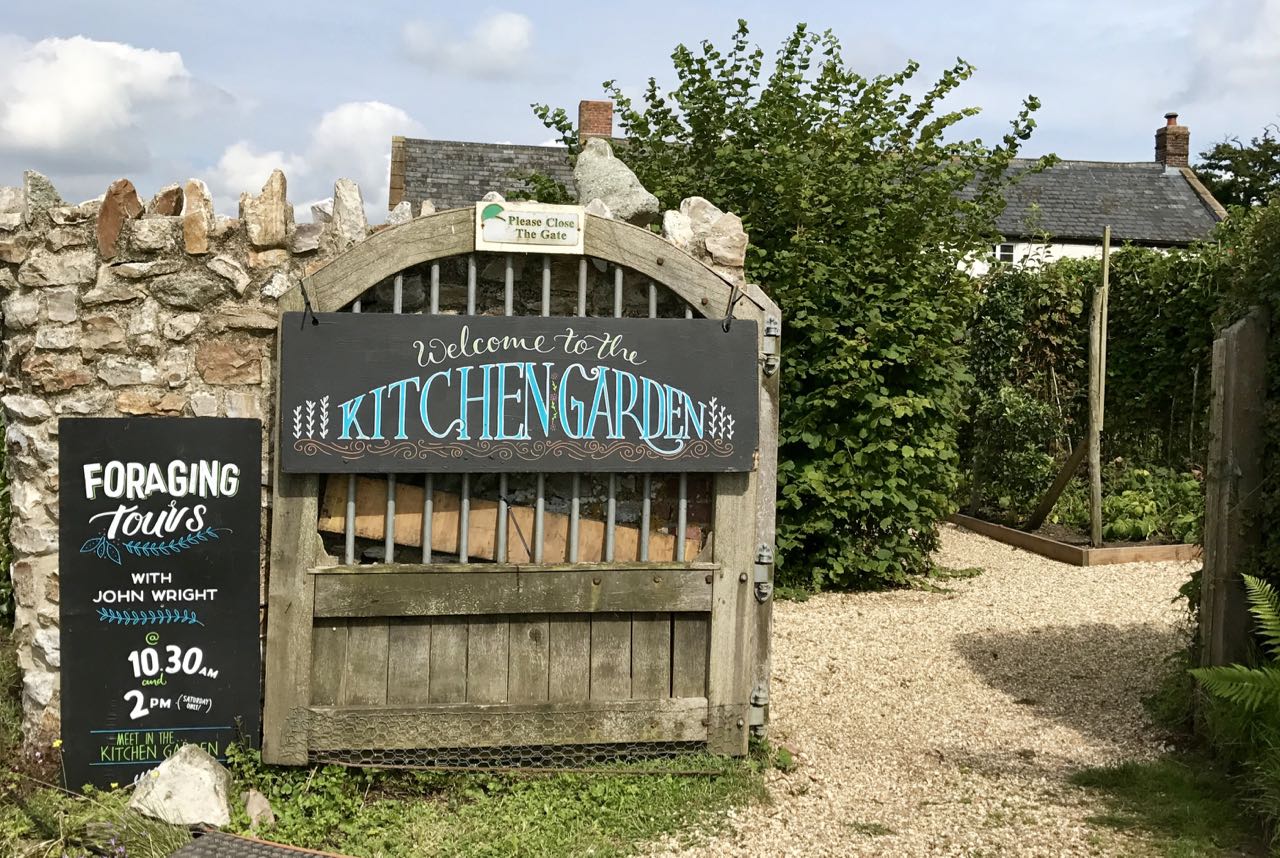 On the Bank Holiday weekend we headed down to East Devon for the River Cottage Festival. We managed to dodge most of the motorway traffic luckily. Safely parked we took the shuttle bus to the festival site just a few minutes away.

We walk down a steep pathway away from the road. Coming out of the trees, we could see the festival site nestled in the valley, flags flying, white tents dotted about and mellow music wafting toward us. What a magical spot for a festival – nothing else in sight.

Some festival goers had stayed in luxury bell tents for the long weekend, others had camped. We were there for the day.

Although it’s our first visit, it is strangely familiar. Particularly the kitchen garden in front of an ancient cottage, still productive in late summer. There are grapes growing one side of the path, young fennel and courgette plants for the autumn, more vegetables, fruit and flowers.Just how you’d wish your potager would be.

River Cottage HQ has featured on many of Hugh Fearnley Whittingstall’s TV programmes. Here, throughout the year you could attend one of the many courses or come for a meal.

The balloon man had children following wherever he went

The site is split up into distinct areas: children’s activities, food stalls around the music stage, the garden stage and food and drink producers and the cottage and book shop. You really can do as much or as little as you like all day.  It’s very relaxed.

In the children’s area, I spent ages trying to capture a picture of the balloon master (any excuse to look at how he worked). Meanwhile children made clay models, got covered in glitter or had their faces painted or played games.

Further up the hill to the opposite side of the entrance, a marquee hosted food and drink businesses. We discovered some mead updated for modern tastes and cider brandy 15 years old. The cheese from the Cheese Shed was delicious. A virtual cheesemonger where you can order your cheese by subscription. Elsewhere, wonky vegetables had been made into seriously tasty hummus by Chic P. Mead has been given a modern twist by Marourde (the variety with beer hops was amazing) and there were grown up marshmallows that were somehow gluten and dairy free. Perhaps reflecting that these festival goers actually cook, there were several companies selling handcrafted knives.

I could have spent all day in the tent listening to the presenters in the Garden Stage. It kicked off with Hugh introducing the festival reminding us it was 10 years since he ran his campaign to alert us to how caged animals were treated and how some slow progress has been made.

He introduced Phil Lympery CEO Compassion in World Farming. His message is stark. Much of the food we produce actually goes to feed animals rather than people. His slick presentation introduced his new book the Dead Zone – where the animals were. Phil has flown all over the world and focuses on the plight of a dozen species threatened by the world’s demand for cheap meat. Later we watched Chetna Makan cook one dish from her streetfood cook book Chai, Chaat and Chutney. Definitely one for the bookshelf.

We discovered further food stalls. Having once lived in Saffron Walden, it was a pleasure to discover gin made from saffron raised close to the town. The saffron is stronger than many types and makes the most delicious drink.

Lunch was in the River Cottage itself. We chose a heritage salad followed by slow cooked beef. Simply delicious!

A particular highlight for me was the foraging walk with John Wright. The last time I met him was in Edinburgh when he was leading a foray in the Botanic Garden. This time he took an enormous group of people no more than 100 metres from the site, but managed to find many treasures including parasol mushrooms all the while telling us fascinating tales. If you ever get the chance to go foraging with John just do it!

For two days there is fun, serious debate about food, good food to eat and to discover. Who is it for? Anyone with a interest in how food gets to our table who is ready to try new things. It’s ideal for families and those without too! A Spring Festival is planned for in Spring next year make a date to attend.

Find out more about courses and events at River Cottage