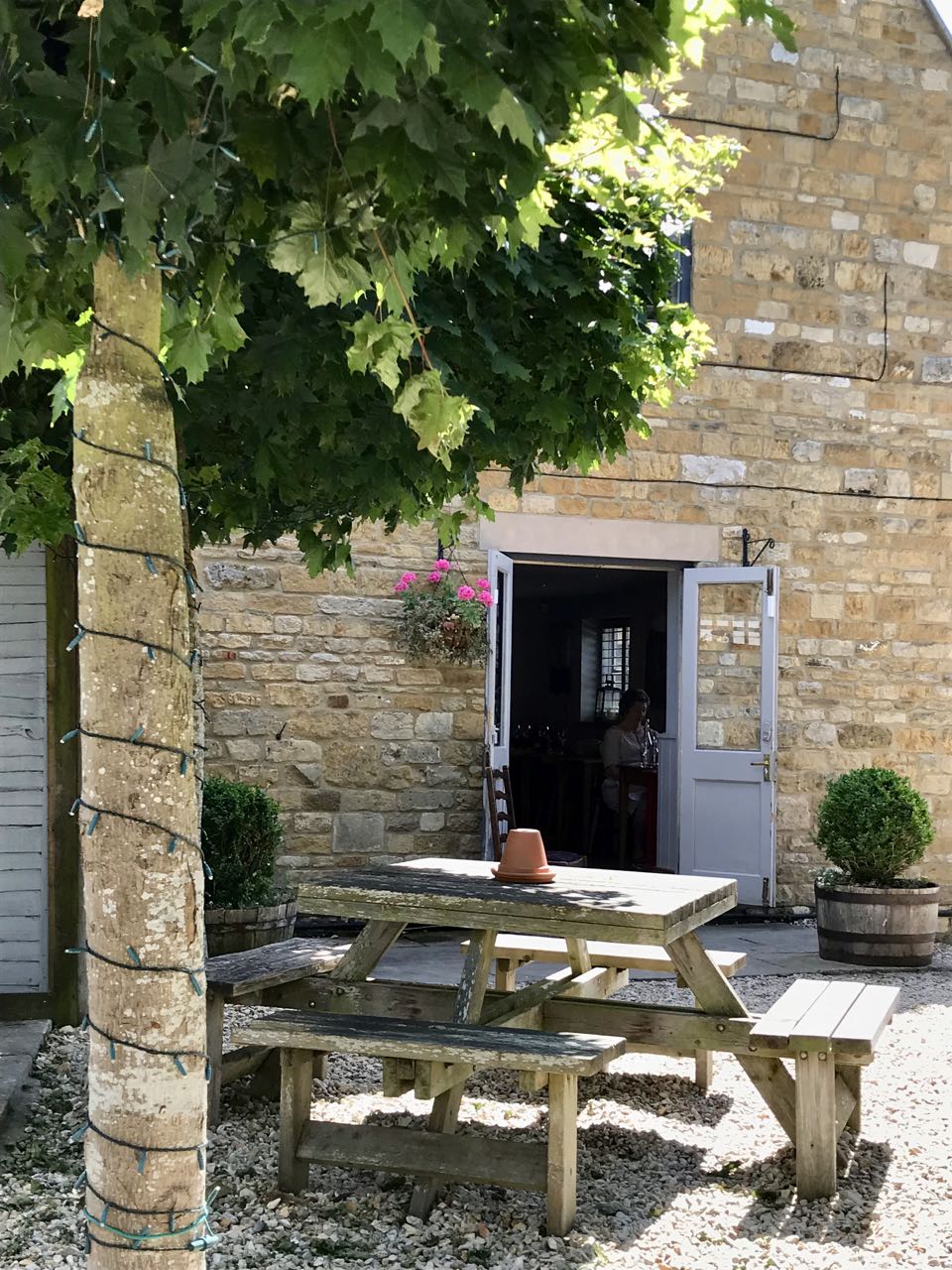 Nick Deverell Smith, head chef and proprietor of the Churchill Arms at Paxford has worked in many of the best known kitchens in Britain, with and for chefs including Eric Chavot and Gordon Ramsay. I rather like that he has a very large photo displayed of one of his former employers, Marco Pierre White, emblazoned with a quotation on the wall near the kitchen. I wonder why Marco in particular?

On another wall is Nick’s signed Chef’s jacket from when he was a Gordon Ramsay scholar. What really catches my eye a series of colourful photographs on the walls. Nick explained that he went out with the photographer and chose the locations and subjects – both landscapes and livestock.

What comes through from these, is Nick’s love of the local area which is reflected in his menu. He grew up nearby. You might recognise his name from the 2017 series of the Great British Menu.

The decor is fresh and contemporary, beautifully judged. But as it is such a lovely day, we do not dwell long inside but head for the courtyard. As we sit there, a man and woman very laden with back packs arrive and sink gratefully on to the seats. We later discover they are walking the Diamond Way – 60 miles in all over several days. The Church Hill Arms will be just one stop on their way.

The staff are charming with just that right amount attentiveness, ready to chat to customers which made us feel very welcome.

You’ll know by now we love eating lunch out. Nick has cleverly designed two menus, one with traditional dishes such as battered fish and chips, the second with light seasonal dishes. Definitely not your standard pub food. I later regret that we did not manage a starter as the choice looked so delicious, but it was so hot that day.

First of a little extra – arancini. These were very moreish and comforting!

My main course is fish. Nick sources his fish direct from Cornwall. The hake had a lovely light dill sauce with summer vegetables. I have to admit I did steal quite a few chips from my husband that he had served with his battered haddock.

After all they were hand cut – we could have chosen string fries too. He also had some tangy homemade tartare sauce.

We of course had to have dessert. Nick’s pastry chef is French and it definitely showed in the exceptional tarte tatin.

My lemon posset served with Cornish Cream was everything a lemony dessert should be sharp, yet not too sharp. It was served with a crispy biscotti.

Having had lunch here, I’d love to try the evening menu and perhaps I could persuade someone to take a staycation and stay over in one of the four rooms on offer?

The Churchill Arms is located in the centre of Paxford village, 2½ miles east of historic small Cotswold town of Chipping Campden. It is open 7 days a week.

Danielle dined at the invitation of Nick Deverell Smith. As always opinions are my own.