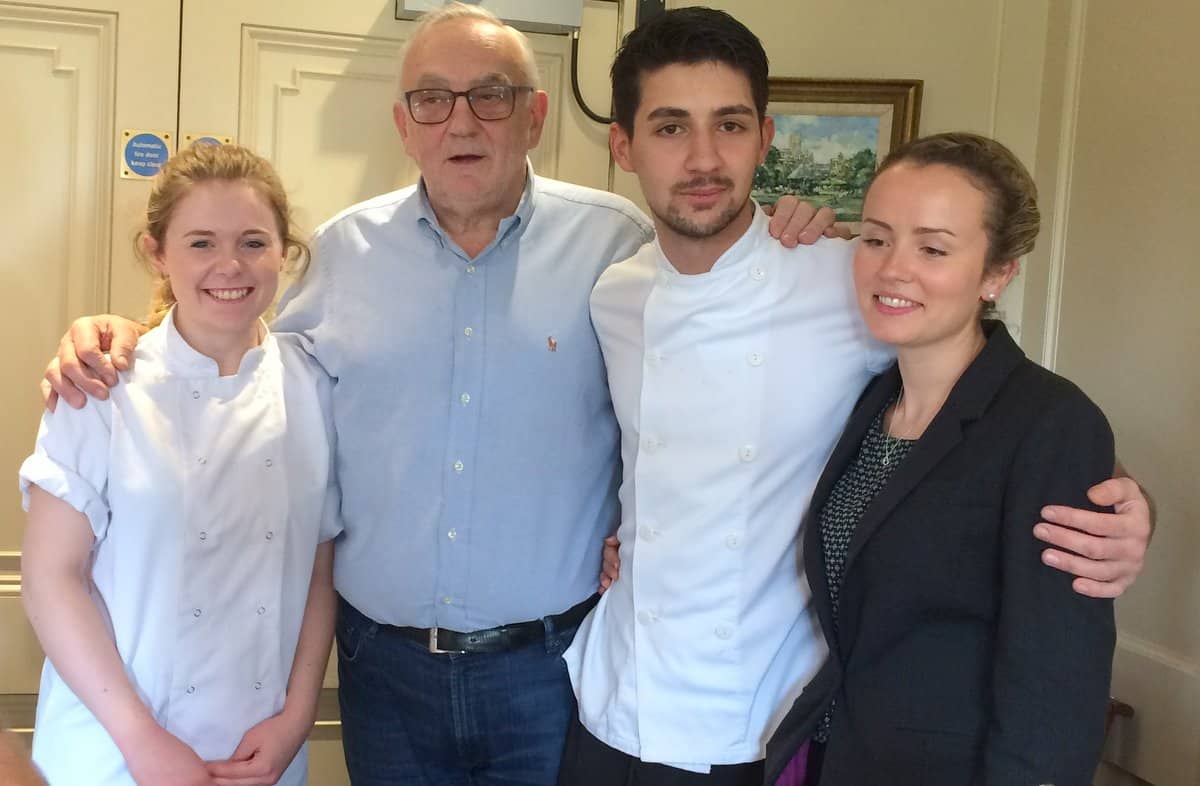 What would you say is a chef’s finest accolade? It could be the number of Michelin stars gained, the length of time in business or perhaps the number of our finest chefs who were trained in his kitchen. For Pierre Koffman it must be all three.

I first really became aware of Pierre Koffman after Tom Kitchin of the Kitchin in Edinburgh mentioned him in awed tones when he first opened his restaurant in Edinburgh. He has continued to do so on many occasions.

“From the start Chef inspired me like no other chef. Working for him was one of the hardest most gruelling things I’ve ever experienced by I wouldn’t be the chef I am today had I not done those years with him”.

Tom is one of more than 20 chefs that Pierre has trained including Gordon Ramsay, Jason Atherton and Marco Pierre White and William Curley, Chocolatier.

Now, after 50 years in the business, Chef has produced a cookery book “Classic Koffmann” We went to a book launch at the Bath Priory to meet him and to try a few dishes from the book.

He acknowledges being a hard task master – making his chefs work harder and harder. It obviously worked. Throughout the book are heartfelt endorsements from the chefs that went through his kitchen. I think age might have mellowed him a little!

The introduction tells his story from growing up in the South West of France to arriving in England “to watch the rugby” and announcing that the food in England then was “unspeakable”.

He later went on to open “La Tante “Claire” and gained his 3 Michelin stars. Having decided to retire in 2004. he was persuaded by Selfridges to open a pop up restaurant in 2009 after finding retirement boring.

Rather than running for one week the restaurant lasted 8 cooking his signature dish pig trotters for 3200 people. He realised he couldn’t stop cooking and when invited by the Berkeley to open a restaurant he accepted. The new restaurant is a brasserie, not formal but still offering the same type of food at La Tante Claire

Reading the cookery book “Classic Koffman: 50 years a chef” is like stepping into his restaurant, very French, with deceptively simple classic dishes. I cooked the Toulouse sausages with puy lentils. My first instinct was to think I’d add herbs to that. But, following the recipe exactly made me realise that the ingredients are the star of the dish. Each element is cooked separately and brought together at the end. It was simply delicious.

I’d suggest it is a great book for winter time. Take time to dip in and try some of the 100 or so recipes. You might have moved away from the French classics, but with this book it is really worth considering them again. Pierre also includes dishes such as Couscous d’Agneau stating that this is the national dish in France (rather like the British with curry). His recipe gets back to the authentic way of cooking “cooking with love”.

Pierre spoke to the audience at the Priory after we ate a meal created by chef Adam Simmonds who is their guest chef until the end of the year . A daunting task taking Pierre’s recipes and producing them for 60 people? It was billed as Adam’s interpretation of the great chef’s recipes. The pumpkin soup was delicious as was the cheesecake. Unfortunately, what should have been the star of the show, duck cassoulet with confit duck was served almost dry. Perhaps showing that it’s not so easy to create classic French dishes after all

Classic Koffman: 50 years a chef is published by Jacqui Small at £30.00