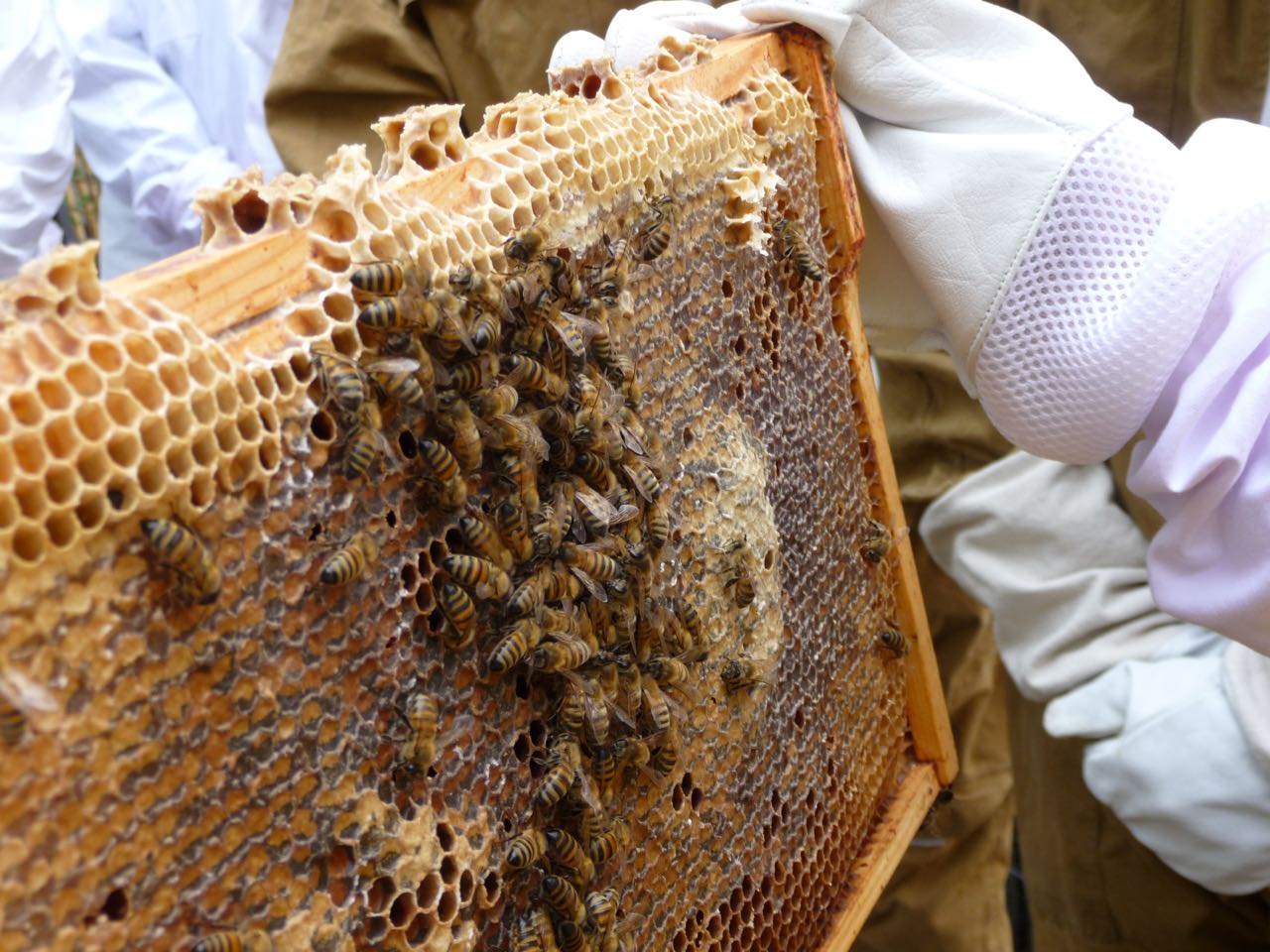 Beekeeping in the City

Wherever I go I like to seek out the local honey. My Sunday treat is honey on croissants.

When we moved house, we started thinking, perhaps now is the time we should get some beehives. We’d began learning some bee theory at a local beekeeping association, but had never got close to a hive. It became more and more essential to find out if we’d get on with bees before we went further. So we set off to, of all places, a hotel in London to learn more!

Actually, the more we looked into it we discovered it is not that unusual. Next time you visit a city, look up. You might just see one of the hundreds of beehives that are now carefully attended on top of blocks of offices and hotels.

The beehives at St Ermin’s Hotel are looked after by Camilla Goddard who set up her business Capital Bee in response to the current critical shortage of honey bee colonies in Britain. She now looks after 70 hives across the city of London was our tutor for our beekeeping course at St Ermin’s Hotel.

We were excited and a little trepidatious. After an enjoyable introduction to bees and beekeeping, we tasted honey gathered from different locations in London together with honey from other countries. It was astonishing the difference in flavours. Bees travel around 3 miles to gather pollen very much reflecting their location.

Getting to know the bees

Now it was time to get into our beekeeping suits. These are curious things. I can only imagine it must be a little like astronauts feel donning a suit that sort of fits but doesn’t. The headgear is the strangest as it hovers round your face making you think there might just be an insect in there already. Of course all of it is very important for safety. After squeezing into a hotel lift the group emerged onto a corridor with a glass wall to one side overlooking the hives. We were three floors up

Stepping on to the balcony, Camilla chose the hive furthest from the door explaining that this brood were particularly gentle. She wafted smoke in to maintain the calm. It was so exciting to be so near the bees and to see them working hard looking after the young and making honey. Nicely protected by our suits, we felt calm too and ready for anything!

Camilla gently dismantles the hive to show us inside

As Camilla takes the hive apart we learn which each section is called, and how the different types of bee, workers, drones and of course the all important queen do their jobs. We even held a frame. It’s fascinating.

Bees are an important part of the food chain pollinating around 30% of our fruit and vegetable crops. It’s not just honey bees who do all the work.

All too soon, the course was over. Did it do the trick? Absolutely, we are ready to take the next step so was everyone else in the group. Fears had been put aside.

Of course, we need to taste the St Ermin’s honey after meeting the bees. We reluctantly said goodbye to Camilla and headed downstairs to enjoy a honey cocktail and afternoon tea which were included in the price of the course. A fitting end to a great introduction to bees.

Five Great Hotels with Beehives around the world

Travel in the United Kingdom and further afield and find out what bee loving hotels are doing.

Lancaster London Hotel has 10 beehives on the second floor roof. When they were introduced in 2009, there were half a million honey bees in the hives, the first central London hotel to install beehives on its roof.

As the hotel is situated next to Hyde Park, it is the perfect environment for the bees to flourish. The bee team care for the bees and collect the honey for use within the hotel. Guests of the hotel are treated to the Lancaster London honey in the sustainable and eco-friendly restaurant Ã¢â‚¬ËœIsland Grill, where it features on the breakfast and dessert menus.

The Chesterfield is home to four hives, which hosts up to 120,000 bees depending on the time of year. The bees must be some of the best connected. They fly in a radius of three miles of the hotel which encompasses Buckingham Palace, Clarence House, St James Palace and Park, Green Park and Hyde Park. Each year they produce around 160lbs of honey for the hotel.

The Red Carnation Hotel Collection, of which The Chesterfield is a part, see the bees as a great way to reduce their carbon footprint, reducing food miles and helping support dwindling numbers of the great British bee. Whilst those taking breakfast at the hotel get to eat the honey on their toast.

The Mandarin Oriental, Paris which has just attained palace status is very proud of contributing to protecting biodiversity by hosting about 100,000 bees in 2 rooftop beehives with the help of a local organization, Le Miel de Paris (website is in French).

What an amazing location for bee hives! Photograph courtesy of Mandarin Oriental, Paris

Bees are an important part of the pollination cycle and thrive Paris, which has been a pesticide free-zone for the past ten years.

The honey is used in a special cocktail at the Bar and guests are offered little pots when they agree to participate to our environmental actions (for instance electing not change the linen or towels everyday.

In New York, the Waldorf Astoria takes the local food sourcing to a new height. It took until 2010 for beekeeping in New York to become legal. The Waldorf Astoria enlisted the help of the beekeeper who helped overturn the ban David Cote to set up the hives on the roof. The honey is now used exclusively within the hotel in many dishes and drinks. This short video shows the bees in action, in branded Waldorf Astoria hives of course.

The hives were installed at St Ermin’s as part of the hotel’s £30m renovation back in 2011 – originally on the roof, then more were added and some relocated to the third floor ‘bee terrace’ alongside London’s first Bee & Bee Hotel in 2013. Further beekeeping courses for 2018 have been announced, register your interest now. In the meantime, if you are in the UK and you’d like to consider beekeeping check out your local association.

Also in London, bees are kept in Regent Street. The chief beekeeper is a pest controller!