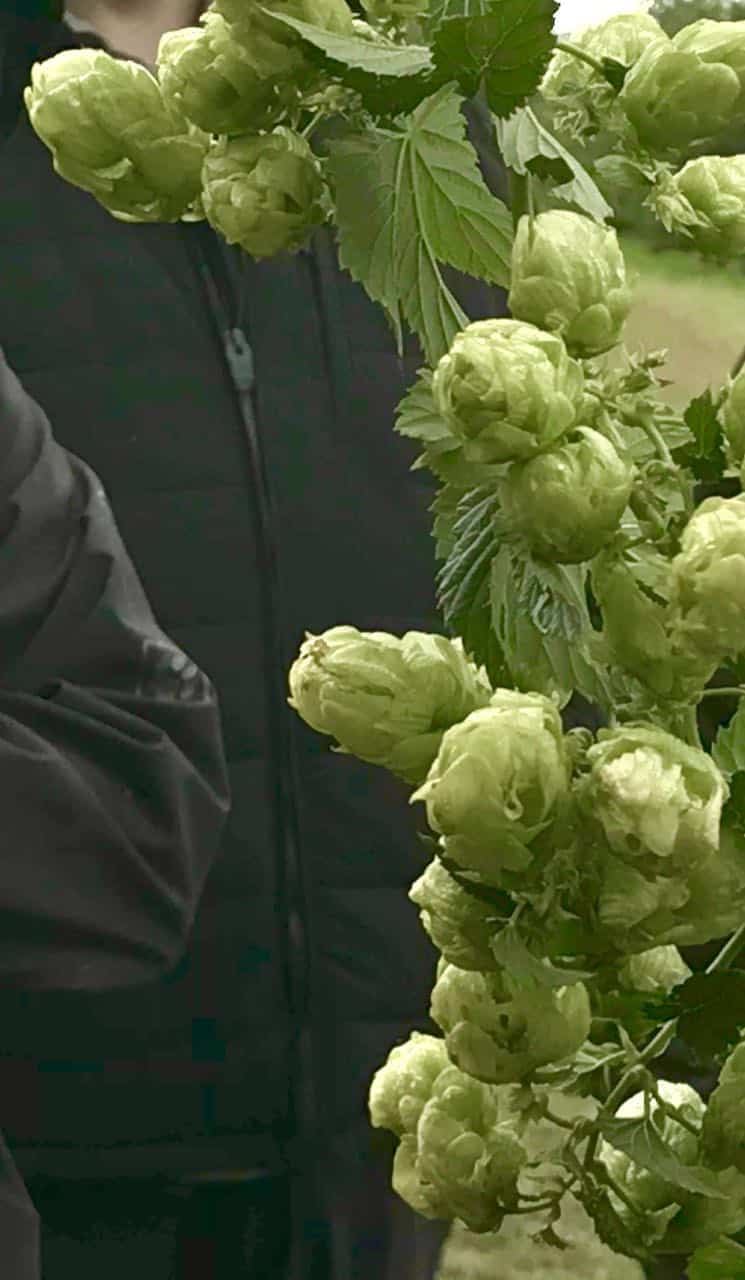 British hops are sought by brewers all over the globe. One hop farm, Stocks Farm located on the Worcestershire/Herefordshire border grows enough hops to create 48 million pints of beer each year on 100 acres. Ali Capper and her husband Richard run the farm, in the family for over 50 years on a site that dates back at least 200 years. Ali is spearheading research into new hop varieties to meet the flavour profiles brewers are seeking. She is Chairman NFU Horticulture and Potatoes Board and director of the British Hop Association. She’s an engaging women with infectious drive and enthusiasm. This traditional business is definitely going places.

Jo Williams is our guide for our visit. Stocks farm welcome groups year round. Recently, a large group of Belgian farmers visited and later that day, NFU members were expected. Jo’s knowledge is encyclopeadic and tour very entertaining.

Hop growing is very labour intensive and specialised. Here Brexit looms again. Ali is cautiously pleased that the government is giving support for a small number of seasonal workers but restriction on the number of workers coming in could be problematic. Most of her workers are Polish (just 6 are locals) and have been coming to the farm for years. Their skills have been acquired over years and years and are not easily learnt.

We are visiting at harvest time. Earlier in the season the bines (stems) are wound round coir string in twos or threes depending on the variety. The bines grow as thick as thumbs. The cone is the part that is used in beer making.

Hops grow all over the world between the latitude of 35 and 55 degrees. British Hops due to our ‘dull maritime climate’ have a lower mycrene content. To get technical, mycrene indicates monoterpene content. This determines the aroma intensity. The hops grown in Britain are more mellow with delicate, complex, aromas. The same hop variety grown in a different country will a different flavour profile.

The bines are perennial and will last about 10 years before they need replacing. The first metre of the bines are stripped of leaves to avoid contamination when growing.

Once the cones are harvested, the bines are cut to about 1 metre from the ground. New shoots will form and will be restrung the following year. They do rather look like tails lying in the field.

Hops in the UK are generally not irrigated. In July hops come into ‘burr’ first, then the flowers develop then the cones. This year, in the intense heat Sovereign variety got ‘stuck’ at bur and they were concerned the crop might be lost. However,  when the first rains came it burst back into life! Goldings; Phoenix; First Gold; Sovereign; Endeavour; Jester; Pilgrim and Target are grown on the farm. There’s also an experimental area 6 miles away where 27 experimental varieties are being grown.

There are two methods of growing – on long poles and a low trellis system. The latter system is easier to harvest. Here, the bines are not completely cut down but are trimmed right back to the metal meshes they grown on. We see Pilgrim growing on long poles and Sovereign on the low system.

All the harvesting and drying takes place once a year over just 6 weeks. A simply vast machine dominates the production area. It was made in Stuckley (where the farm is located) over 50 years ago and is still going strong.

The bines are strung up at one end of the machine and go through many stages. The cones stripped off and processed through the machine into enormous trays – the depth depends on the variety. The water content is reduct from around 75% to around 9%. This takes around 6 hours at 62C requiring vast amount of energy. Afterwards they are conditioned, to let a little moisture back into the cones.

The cones are then packed into 60 kg bales simply by compressing the hops rather than by vacuum packing. The aroma in the packing area is really intense. More than 960 bales were produced last year for destinations world wide. With the exceptional weather, the Cappers are not quite sure what total production will be like this year.

The all important taste

At the end of the tour we head to the Hop Shed – the first brewery to open in a hop farm to taste beers made from hops grown on the farm. Sarah, the head brewer is in the process of making green hop beer. This process requires 4 or 5 times the amount of hops than dried and can be quite tricky. We’re sorry not to have the chance to try it.

Visits can be arranged throughout the year

We visited Stocks Farm with Brew Bods. They have a great beer subscription service available.

Homebrewers can buy small quantities of hops direct from Stocks.

The Hop Shed is open on Fridays and Saturdays.

If you’d like to know more about the hop pickers in the past, The Hop Project, a fascinating art project took place in 2017. There’s an online book you can browse that includes many interesting photographs.

1 thought on “British Hops at their best”