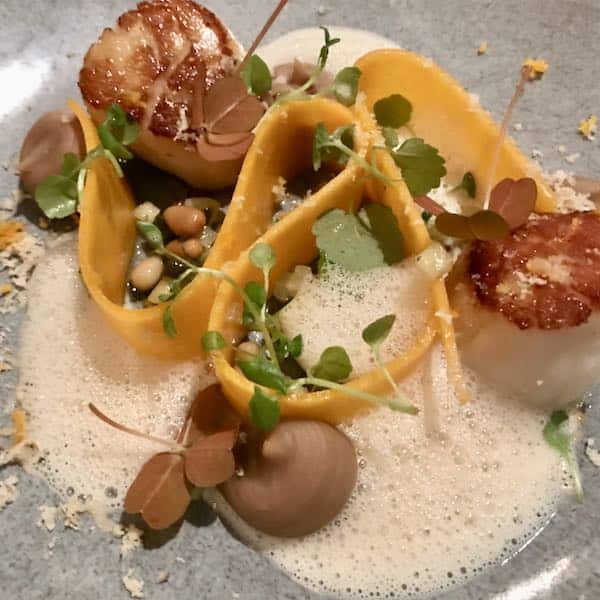 It’s not much fun having a birthday in January. Restaurants are often shut, the weather is cold and dreary. But there was the twice yearly bread exhibition Europain on in Paris. Why not combine a short break with a visit to the exhibition? We booked our seats on Eurostar. Of course, at the time we booked, we had no idea about the transport strike.

We chose our hotel through Secret Escapes. Hotel Spa La Belle Juliette was in a lovely location: quiet, devoid of tourists and close to some interesting shops and cafes not far from Montparnasse.

Due to the strike, we carefully chose where we’d eat. It had to be within walking distance of our hotel.

The Parisienne transport strike is curious. If we had such a strike in London, it would surely be all out, nothing running at all. Here you could consult the RATP website and discover when each metro line would be running and which stations would be closed. Most lines were operating very reduced hours say 6:30 am to 9:30 then 16:30 to 19:30. So, should you wish to squeeze into the trains you could get to and from work. When you were on the train, if a station was shut, you just sailed through.

Choosing where to eat in Paris

With a city with potentially thousands of restaurants (more than 40,000 apparently) how do you choose? We decided mainly on restaurants with one Michelin star, that were manageable on foot and open on the nights we were there.

We love eating out and it’s a big priority when we’re on holiday. Wherever we have travelled, Michelin star restaurants have been an excellent indication of good food. (We tend to stick to one star restaurants).  Michelin assures us that all restaurants are rated in the same way. But our experience in Paris suggested something else.

From our experience, we discovered the following types:

And in the interest of balance, one that is not Michelin starred at all:

Divellec was open on a Sunday, perfect for us. The restaurant focuses on fish which we love. As you enter, there is the most enormous cookery book featuring 800 recipes from chef Mathieu Pacaud’s 5 restaurants displayed (just £127 for the first volume). In 2016 he took on Divellec to “revive it”. The staff are delightful, especially one young woman who was very knowledgeable and spoke several languages including Japanese.

But the menu! There were various fish listed with a cost per 100 grams (eg 15 euros). On asking we were told the fish would weigh around a kilo before filleting. How much would our meal actually cost?

There was also little that instantly tempted me. We chose a main course each from the à la carte menu. In the end both our dishes were strange. With one fish dish, there were no fewer than three different sauces which did not belong together or with the fish with a onion side dish. My lobster dish came with the sauce poured over branches of rosemary which of course are not edible. The dishes were tasty enough but confused. The desserts were very average and at an eye watering price. Was this meal typical of what comes from this kitchen? Or is eating fish on a Sunday not ideal? It’s a grand location and the service impeccable, but it was disappointing and very expensive.

I know best, not my customers

I am still reeling from the experience at this restaurant. I should have guessed something at the way our booking was confirmed and reconfirmed again and again.

Our reservation for Pilgrim was at 7:30 pm. We arrived a few minutes before to find the doors firmly closed. Had we got the wrong night? No, there were staff milling about inside. The door remained firmly closed. Eventually we banged on the door. Eventually we were let in. Not a great start.

Then started the hard sell. There was a set menu for diners which the Maitre D’ explained. Three courses had potential supplements – you could add truffle for 35 euros for example. We worked out that you could have double the set menu price if you added all the supplements on.

We had glasses of wine, one was cloudy. We queried this and the sommelier said he’d tasted it and it was alright. Now it could have been the way it had been made, but that wasn’t explained. We eventually got a different glass of wine. Shouldn’t the customer be right?

“Chef Terumitsu Saito invites us to taste French food with a Japanese touch” states the website. Flavours were either underpowered or over powered. Creme brûlée fois gras anyone? This was very strange a sweet vaguely meaty taste. One dish with yuzu and scallops was so strong, there was no possibility of tasting the scallops. Our waitress said she’d “ask the chef to tone the rest of the meal down for us”. A black onion tempura was eye catching, but it was unseasoned, The beef in another dish was full of gristle and paired with vanilla flavoured parsnip puree. I could just hear Marcus Wareing’s comment:”vanilla?”

Maybe we were expecting too much from Japanese French cuisine? We had had an exceptional meal in Reims with a Japanese chef which led us to reserve this place.

Instagrammable dishes? Yes. Fabulous flavours? No.  Is this where things are going? Who cares what it tastes like? I do hope not.

At the end, the Maitre D’ asked where we were from, we replied England. We’d been speaking in French to the staff. Oh he said, “We could have chatted in English about my time in London”. I think not.

Of the three Michelin starred restaurants that we ate at, Cobea came closest to what we’d hope to find They are part of “Les Amis Saisonnier” 26 restaurants in France  (60 in total in Europe) that focus on seasonal ingredients from their locality. An interesting group includes some of the very top restaurants including Maison Troisgros but new upcoming chefs.

Here flavours did come to the fore. Crispy quinoa on pureed celeriac really elevated the dish (must try crispy quinoa at home). I loved the grain mustard butter with the bread – you got little pops of flavour.

Raw sweet potato featured on the scallop dish – never tried that before and the unusual sounding banana rum in the sauce actually went really well.

I don’t know about you, but we find often the meat dish is the least interesting and successful, but here the pigeon was buttery soft and served with carrots three ways – lovely. Desserts delighted us – we had three after a palate cleanser. There was mango with shards of meringue, a chocolate boule, then macarons and jelly.

The menu was the same price as Pilgrim but was streets ahead in taste. We were made to feel very welcome and even left clutching home baked biscuits for the next day and a magazine about  “Cusine saisonnière”.

Once we’d arrived at the Gare du Nord we decided to take a bus rather than a tube train due to the strike. Having enjoyed a mere 6 hours door to door including the train to London, it then took us nearly 2 hours to arrive at our hotel rather than 30 minutes – not the best of choices. We were hungry by then!

We discovered a La Cantine due Troquet in Rue du Cherche Midi, one of a group of 6 restaurants focusing on cuisine from South West France.  This was charming and welcoming and just what we needed.

Dishes were chalked up on a blackboard. Simple, unfussy dishes. We decided to share what proved to be an outstanding dish: softly poached egg, parmesan creme, parmesan crisps and smoked duck. Tangy, tasty with just the right amount of texture. I continued with a pork chop with smoked jus, my husband grilled bass with green sauce. Portions were generous. Desserts followed creamed rice and caramel for me, traditional pear and almond tart for him. We were sated.

Our choices are probably what another couple might make when they don’t know a city. Whilst you can read reviews to gain some kind of idea, the results are hit and miss. Perhaps only personal recommendations really work? We’ll certainly think twice about eating at Michelin star restaurants in Paris next time. What would you do?

By the way, we’d highly recommend travelling by Eurostar, a definite improvement on air travel. Paris was itself. Beautiful, dirty, fascinating and enticing.