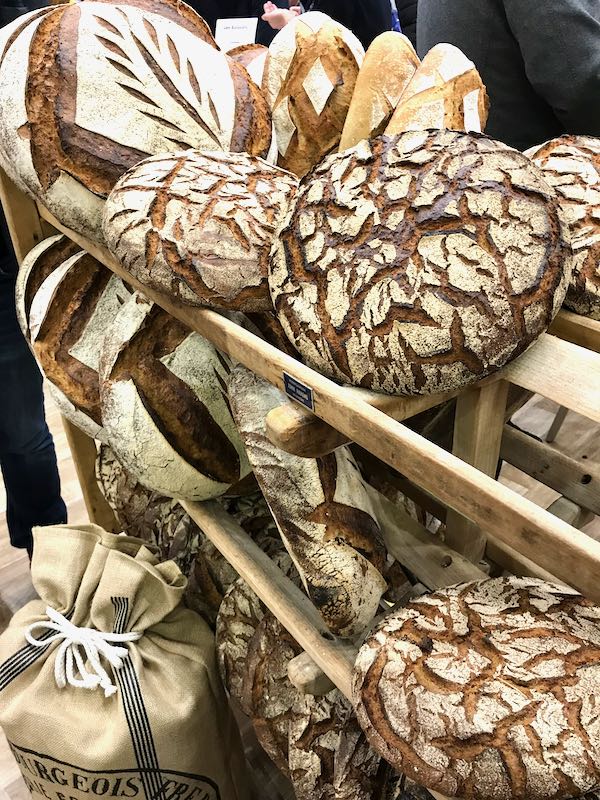 This January, I was in my element at Europain in Paris. Held every two years, this huge bread exhibition attracts 50,000 professional bakers from all over France and further afield to indulge their love of bread. No matter what your passion is in life, if you’ve got the chance to experience with others, you should just go for it.

Come with me and get inspired.

Masterclass with Winner of Best Baguette 2017

How does a master baguette maker fashion her breads? Refreshingly, in the same way I was taught. Here she’s shaping baguettes made using Foricher flour. Mei is Japanese and has worked for Eric Kayser in France and Japan.  She was the winner of Best Baguette in 2017 and in 2018 she won the award for the Best ‘Galette Feuilletée aux Amandes’ an almond pastry from the Bas-Rhin region in France.

Top millers from all over France exhibit at the exhibition. Many set up bakeries where you can watch the bakers at work using that mill’s flour. Can I aspire to these shapes and forms? Of course! Bakeries tend to work with one particular miller rather than several.

There was a big emphasis on organic flour this year and on older grain varieties such as Khorasan or Kamut. The bread shown is a sourdough with the starter made from Khorasan too.

The finals of several contests were taking place at the exhibition. The judges, all Maitre Ouvriers de France (MOF) are easy to spot with the red white and blue stripes on their collars. (This accolade is hard won with many years of expertise in a given profession and examinations and is considered the highest of honours).

I stood and watched finalists in the Bakery World Cup. It had taken the finalists four years of competitions to get to this final stage. They produce items in the following categories: Baguette and breads of the world; Sweet viennoiseries; Artistic creation; Gourmet baking. I thought the Japanese entries particularly fine (they came second).

Elsewhere the Russian team had served us a vivid green cake in the Coupe du Monde de la Patisserie contest and the youngsters taking part in the culinary school championships whooped their way throughout the day.

Looking to the Future

The consumption of bread per head in France is going down and boulangeries are changing. Many are adding places to sit and eat rather than just sell bread. There was plenty of emphasis on ‘le snacking’ and it was a joy to see sandwiches where the bread flavour was just as important as the filling.

I watched a demo where buns were stuffed with a cheese sauce (previously chilled in cubes). When baked this centre oozed beautifully and tasted divine.

I was particularly impressed by one area of the exhibition where students from Le Cordon Bleu were running a bakery and cafe for the public under the watchful eye of Boulangerie Technical Director and Chef Instructor Olivier Boudot. Customers ordered from touch screens and were served by first year students. The second years were busy in the bakery.

The range of snacks were wide and varied and included bread made from pulse flours. Nothing got thrown away. Everything could be transformed, giving unsold goods or leftovers a second life and using as little packaging as possible. Wouldn’t it be wonderful to see other culinary schools working this way?

On the sweet side

Le Chef magazine placed the emphasis on sugar creations by organising a  ‘Sweet Edition’ of the Festival of Gastronomic Creativity. Here, top pastry chefs, three at a time were asked to create desserts and we were positively encouraged to taste the results. This dessert has mango flavours and a crisp sugar-y leaf on top – I am not sure what sort! It was truly amazing.

And there was more

The exhibition lasts four days, I had just one day to explore. There were interesting machines and equipment; new products (an intriguing one based on potato that is used like aqua faba); vanilla direct from Madagascar; tempting books …  I bumped into staff from where I trained at Ecole Banette and had a great catch.

I came away full of ideas and inspiration. Just two years until the Europain!