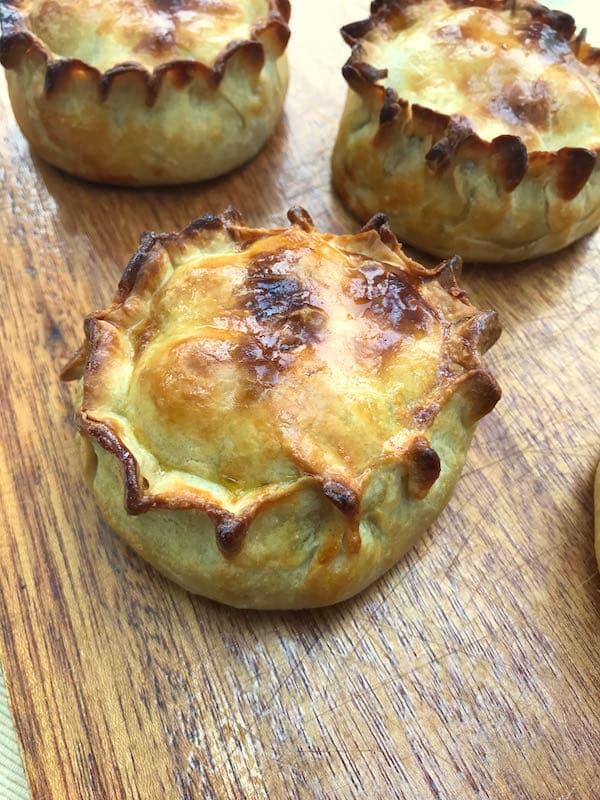 Do you make a traditional recipe from your locality? As a newcomer to Gloucestershire I really wasn’t aware of a particular recipe to make. There seemed to be nothing as well-known as Bakewell Tart or Eccles cakes.

I started researching and asked for suggestions, but nothing really grabbed me. Then following a link about a different dish,  I discovered Oldbury Tarts filled with gooseberries.

Oldbury-on-Severn is a small village near the river Severn with a population of about 800 people. The village was known for its Oldbury Tarts when they were made for the Whitsun Fair in particular. However,  despite the recipe for Oldbury tarts allegedly going back 200 years, it’s difficult to find any mention later than the 1940s.

I’ve spent an enjoyable time comparing recipes and even talking to one lady who has been making them for over 70 years! The Oldbury Gooseberry Tarts are made with sweet hot water crust pastry.

After many different attempts, I have a recipe for you to follow. The Oldbury Tart recipe does take a bit of patience and it’s important not to cut corners – they do need to go in the fridge for several hours or even overnight before baking.

I made my tarts with gooseberries from the freezer. It didn’t make too much difference if they were cooked from frozen or thawed first. However, whole gooseberries worked better than ones chopped. One recipe I found specifically asks for small young gooseberries which would be ideal.

I also made a version with blueberries which was tasty, but perhaps not quite tart enough. Apparently,  they were also made with blackcurrants when in season.

This was the first time I had made sweet hot water crust pastry. I started with Callum Franklin’s standard hot water pastry recipe and added sugar. (By the way his book on The Pie Room is a must have). The first version tasted too much of lard. The final version has both butter and lard which tasted much better.

It’s essential to have something in the pie case to mop up the juices. I first tried cornflour which didn’t work. I sprinkled the bottom with semolina which worked really well (thanks to Steph Clubb for the suggestion).

The recipes mostly agree that the bottom of the tart should be saucer-sized and the top cup-sized. Certainly you do not need larger, the tart it is filling! I used an upturned ramekin dish, well-floured ,to shape the pastry into a cylinder shape which worked well. The lid was sealed by pressing the edges together, then crimped. I egg washed the pastry.

After time in the fridge, I baked at 200C for 20 to 25 minutes. I have two different ovens and the timing varied. You want to be sure that the bottom is well baked and the crust a good golden brown.

Why you should make these tarts

The tarts are so delicious. This is comfort food on a plate: beautiful crisp pastry with a tart filling. This is one that will definitely remain on the menu. Now where is the custard? 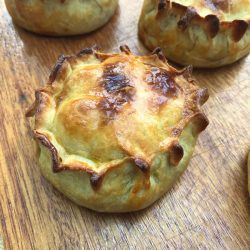 Danielle Ellis
A delicious gooseberry pie made with sweetened hot water crust pastry. The tarts are a little time consuming to make they are well worth the effort. Do follow the instructions, particularly for putting in the fridge before baking
Print Recipe Pin Recipe
Course Dessert
Cuisine British
Servings 6 tarts

For the hot water crust pastry

For the Egg wash

Xanthe Clay mentions the Oldbury Pie in her round up of pies and puddings we should cherish.

In a Taste of Gloucestershire (2009) by Andrea Leeman she includes a recipe from Mrs Sue Taylor. Her aunt Edie showed her how to make the tarts. Her recipe does not include any sugar in the pastry.

Jane Grigson’s recipe mentioned by Nigel Slater. This is closest to my recipe.

Neil Cooks Jane Grigson  He did not like the pies at all!

In Paul Hollywood’s recipe made by Tanya from the The way I cook he uses such a tiny amount of sugar, I can’t imagine it doing its job.

In this version, Mary Anne Boermans author bakes the pies more like a gala pie and adds elderflower.

Check out these pastry recipes: