Bake Better Bread: Why you should scald flour

Why scald flour? It will give you a lighter loaf of bread that lasts longer! It might sounds like something that would hurt, but not at all. It’s simply pouring boiling water onto an amount of flour.

If you’re keen to make bread with a flour that has lower levels of gluten than wheat flour, for example rye, barley or buckwheat, scalding is the method to use. Not gluten free, but a method of adding these wonderfully flavoured flours into your bread. With this method, you can get a beautifully formed loaf. I find that the resulting bread has a light, even crumb, far lighter than if you had not scalded the flour. It also is more moist and keeps longer.

You might have discovered that using rye, barley or buckwheat make for a more solid, flatter loaf. This is a great solution.

A few years ago I was lucky enough to participate in the Kneading Conference in Skowhegan Maine as a work study volunteer. One of the sessions that has stayed with me the longest was led by Daniel DeRosier who is the owner of Boulangerie des Rosiers in Notre-Dame-de-l’Île-Perrot, Quebec. He demonstrated how scalding a percentage of flour, particularly flour with low gluten content, would result in a much improved loaf.  It was a game changer for me. It was hard to believe at first what a difference scalding the flour made.

Now you can get the all the flavour of rye, barley or buckwheat (and many other flours) that are lower in gluten into your loaf easily. Adding hot water gelatinises the flour and helps with the conversion of starches to sugars.

You might be thinking, this sounds like Tangzhong where flour is cooked with water and milk and it is.  Scalding is an even simpler process and is perfect for flours which have a great taste but are more difficult to use on their own due to their low gluten content.

How to scald flour

To scald the flour,  simply pour over very hot water (if you’ve boiled the water leave for 5 minutes before using) using the same amount of water as flour and mix well (eg for 200 gr flour, you’d add 200 ml water). When it is completely cool you can add it to the rest of the dough. I always autolyse my dough, whether it is yeast based or sourdough. I add the cooled scalded mixture when I autolyse. Depending on the flour used, some goes lumpier than others so you might need to break it up into pieces as you add it.

Once you’ve scalded your flour, you now need to think about how much water you’ll add to the remaining flour. After experimentation, I find that adjusting the hydration of the remaining dough by half the amount of water added to your scalded flour works really well.  For example

When I add the scalded flour to rest of the flour, I have in fact used 480 + 160 ml water which is a total of 80% hydration. Read more about Baker’s percentages

The amount of sourdough starter in this recipe is correct, 40% of flour weight. You can of course adapt your yeast recipe to add scalded flour – use the same 20% as mentioned. 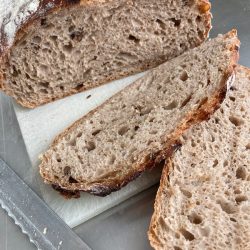 Danielle Ellis
A key element of this recipe is scalding the flour before use. If you do not have barley flour, swap it with another flour such as buckwheat, oats, or rye. This recipe makes two large loaves. This recipe is for a sourdough loaf and assumes that your starter is ready to use. I feed mine with 100 gr flour and 100 ml water about 6 hours before I use it. If the temperature is over 25°C (77°F), reduce the autolysing and first proving times to 2 hours. Weighing accurately will make all the difference!
4.34 from 3 votes
Print Recipe Pin Recipe
Course Bread
Cuisine British

Mix and Knead the dough

Prove the dough in the fridge

Pre heat your oven and pan 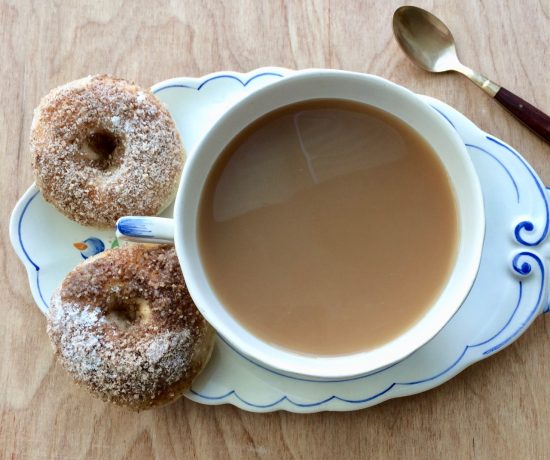