What are Galettes des Rois?

At this time of year, Epiphany, French boulangeries are stocked with Galettes des Rois (king cake). In its traditional form, these are two disks of puff pastry filled with almond creme (often called frangipane). A small token is placed inside each one, should you find this, you are King (or Queen) for the day.

The top patissiers make the most beautiful Galettes des Rois in all shapes and forms. It’s well worth looking at the #galettesdesrois hashtag on Instagram or check out some of the best galettes for 2022.

Can you make a Galette des Rois at home?

You can indeed make one of these pastry marvels and it is well worth the effort. This year I decided to try using rough puff pastry rather than the time consuming puff pastry and I am thrilled with the result. You’ll still need some time, as it works best if you can leave the pastry overnight. You can of course, use bought puff pastry.

Flavouring is really important. I’ve previously made the Galette des Rois and have not added enough punchy flavour to the filling. This time I am adding both rum and orange peel.

Brushing the pastry with egg and letting it dry makes it far easier to score. The trick is to score only, not cut through the pastry. I use a lame that I would use to score bread with.

When you bake the pastry, don’t be tempted to take it out of the oven too soon. It needs to be golden top and bottom and could take up to 45 minutes.

If you’ve not made rough puff pastry before, be brave. It seems so improbable that adding cubed butter to flour and roughly mixing will achieve the desired result. It will, I assure you. You can then use this pastry for other items, including sausage rolls.

Bakeries create a series of tokens to collect each year. Of course, you’ll never know which one you’ll find in your galette. A good excuse to buy more! 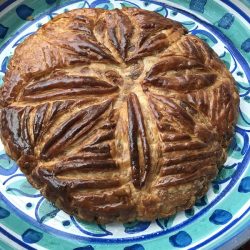 Danielle Ellis
Traditionally made at Epiphany, this is a crisp pastry filled with almond cream sometimes called frangipane. Give yourself plenty of time to make this, it will be worth it! You will have some pastry trimmings left over and some extra creme patissiere.
Print Recipe Pin Recipe
Prep Time 2 hrs
12 hrs
Course Dessert
Cuisine French
Servings 8

Across Europe there are many traditional cakes made at Epiphany – I’ve a recipe for a brioche for Epiphany for you to discover.