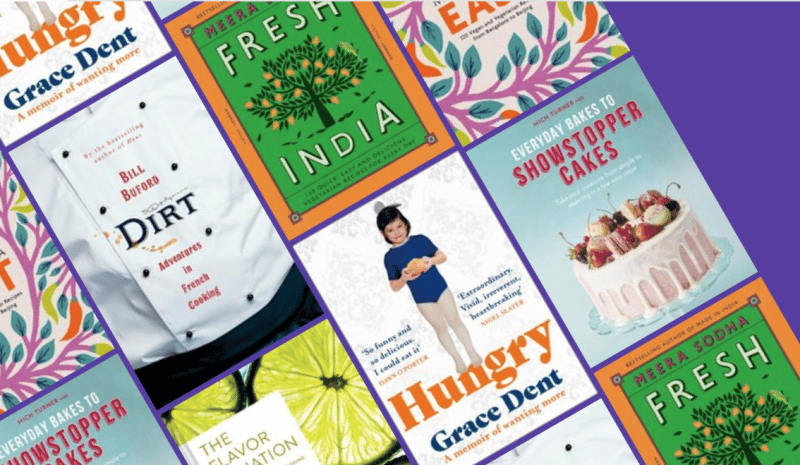 Tried and tested – coo books that I heartily recommend

I love a good book, preferably a cookery book or one about food. Recently, I’ve been more ruthless getting rid of ones that for me, really do not work. I’m keeping the ones that inspire and that I cook from all the time and am always adding to the shelf.

So, if you’re looking for a really good cookery or food book either to treat yourself or to put on your wish list for a present, here are my recommendations. I’ve read them from cover-to-cover and tried the recipes. Not all were published this year, they are just really, really good.

Where to buy the books

The Flavour Equation – My book of the year

I knew very little about Nik Sharma before I got this cookery book. I’d heard him interviewed on the Honey & Co Food Talks podcast and discovered his blog, A Brown Table. Now I’ve discovered he has a background as a molecular biologist. In this book, he shows how that influences how he cooks.

I have to admit I just launched straight into the recipes in the Flavour Equation, only later reading his explanations at the start of the book of the hows and whys of taste. Imagine his take on Gunpowder – a spice mix that when sprinkled on food makes it zing. These are Indian inspired recipes you’ll find now where else, which will wow you every time. The photography is inspiring too.

When I first learned to cook with my mother and grandmother, I noticed how aromas were carefully built into the food we prepared. If we made a stock or a dal, either spices or aromatic ingredients like onions, garlic, and ginger were cooked in fat over heat to release their aromas and draw them into the fat. Sometimes aromatic ingredients were added toward the end, just before the food would make its way to the table—like fresh lime zest scattered over a slice of pound cake, so you’d smell the citrus aromas immediately. Nik Sharma

It seems I am not alone. The book has been named Best Cookbook of Fall 2020 by The New York Times, Epicurious, The Kitchn, Chowhound, Eater, The American Library Association Booklist, CNN, Food and Wine, The Daily Telegraph (U.K.) and more.

Two memoires or are they autobiographies?

Can you really like a book that annoys you too? I think so. Bill Buford set off to do something many of us have dreamed of – to go to Lyon in France and learn to cook. However, as a writer for the New York Times, Bill had somewhat of an advantage and knew plenty of people who pulled favours and got him into kitchens the average chef would never end up in.  Bill is at his best when he describes the trials and tribulations of working in a French kitchen and when he discovers produce and techniques.

He started cooking in Lyon around 2009 and stayed 5 years. He gives a portrait of what it was like to work in the top restaurants at that time – I hope they’ve improved. He’s not too kind on Lyon either, describing it as a dirty, unwelcoming place. Not the gastronomic capital it is. However, this really is a cracking read.

Many of us will have first come across the restaurant critic Grace Dent on Masterchef. She always appears very slim; her judgement fair and to the point. Food has always been important in her life and not for the reasons you might think. She spent most of the time not eating to keep herself thin.

This is a beautifully written, evocative book, you can hear her voice as you read. She’s particularly good on what life (and food) was like when growing up – the growth of vast supermarkets in her home town and how the menu choice was down to what was cheapest. There are moments of sadness as her Dad’s mind starts to deteriorate and she has that agonising choice of going home to help or to give up work. There’s also plenty to make you smile. You realise that with someone well known, you really do not know them well at all – let your prejudices fly. You’ll devour this one!

Has this been the year for vegan cookery books? Please don’t dismiss these because you’ve heard enough already. Discover Meera Sodha who writes the Guardian’s New Vegan column.  Her recipes might be vegan or vegetarian, but in truth they are simply really tasty. If you are wanting to eat less meat and fish, I heartily recommend these books.

These are the recipes I cook because I really like the flavours and the recipes come out well every time, not because they are vegan or vegetarian.

Neither of these books are new this year, but having bought Fresh India, I had to get East too. Fresh India is written from a British perspective, using seasonal ingredients and Indian Flavours. A favourite is aubergine, tomato, chickpea and spinach.

In East, Meera spreads her wings further afield and takes a journey across Asia and introduces us to recipes such as Bibimbap made with sweet potato.

My only error was getting both of these on Kindle. I really, really want the hard back editions.

At last I have found a book full of full-proof cakes. No it is not from Mary Berry but Mich Turner. This book came out early in 2020. Having made one of the recipes from this book published in a newspaper article, I was determined to track down this book. It was one of the best chocolate cakes I had ever tasted.

What I hadn’t realised from the print recipe, is that there’s a twist. Each recipe is presented in a simple version (or two) and ‘showstopper’ version. It might start out as a cupcake, but the same recipe (with quantities sometimes increased) is transformed into something fabulous. I’ve made most of the cakes in the book and they all came out really well. Quite something.

Make your wishes and you’ll get cookbooks and food books you will love all year.

1 thought on “Food and Cookery books for your wish list”