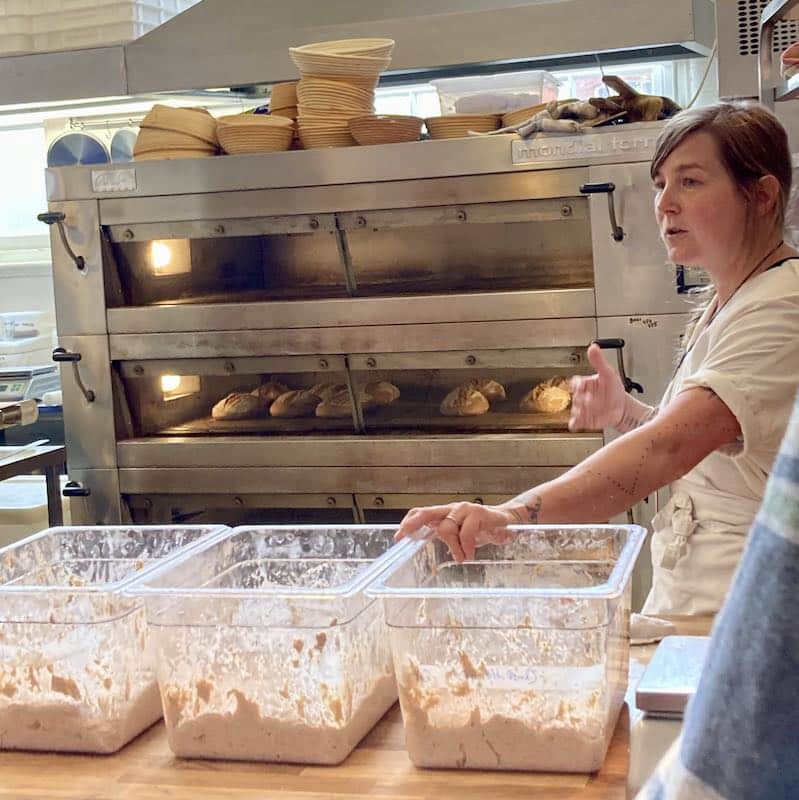 Heritage Wheats are coming to a bakery near you

Can you imagine going to your local artisan bakery and choosing your bread as you might choose a bottle of wine? I am sure you have a favourite type be it syrah or chardonnay.

How would it work at the bakery? The breads will be made with a particular wheat variety chosen for its flavour characteristics. It might sound a little far fetched, but making bread with specific wheats is on the rise. Why? There’s more flavour, a greater range of minerals and the chance to champion locally grown products.

Wheat in the UK

The good news is that most of the wheat that UK flour millers use is grown in the UK – in a typical year around 85% is homegrown. The number of varieties grown commercially however is limited about 50 varieties  The the majority of which are not for use in bread flour and are not suited for organic growing.

Heritage wheats are becoming more widely known. Some define heritage wheats as those that grew before growers started to select and change individual characteristics in the mid 19th century. They chose wheats that provided better yields in soils  that had higher levels of nitrogen from either manure or guano.  Only the most promising wheats were retained and multiplied but most of the diversity that once grew in farmers’ fields was lost.

Others define heritage wheats as those raised before the so called Green Revolution created by Norman Borlag. So some manipulation of the farmer would be in play.

In the 1960s Norman Borlag transferred the genes of a dwarf wheat into ‘standard’ wheat to reduce the size, increasing yield and making it less likely to fall. He was successful, but didn’t consider the flavour of the wheat. The new wheat also needed more fertilisers and chemicals. Older varieties of wheat fell out of use.

Farmers are rediscovering varieties that grow particularly well in their soils and trialling older varieties. Discovering way in which to add these grains to what they grow.

One such farmer is Fred Price at Gothelney Farm in Somerset. Grain growing is just one part his farm’s produce. For 12 years they have been transitioning the farm to agroecology, reimagining a new small farm future where farms feed people justly rather than via an extractive cumbersome and commodified food system.  More recently, he has invested in a mill for the flour grown and baker Rosie has opened the Field Bakery on the farm. Talk about keeping food miles to the minimum!

Mike Pinard of Heritage Wheat successfully trialing heritage cultivars back in 2016, he is increasing the area grown and has since developed a thriving niche business, selling flour to a range of bakers and online. Mike Pinard defines heritage wheat as a long-straw wheat grown as a diverse genetic population, growing to heights of 1.2-1.5m tall. Speaking to Farmers Weekly he explained

“Taste and flavour of the bread was the number one trait when it came to variety selection,” explains Mr Pinard. “Unlike modern varieties, heritage wheats have different taste traits – particularly depending on soil type.” What started out with 30 different varieties grown at Lodge Farm and harvested in 2017, has been whittled down to just three: Red Lammas, Old Kent Red, and Chidham Red.

Researchers in Sweden(1) discovered when testing both newer varieties and ones that we might term ‘heritage wheats’ that older varieties of wheats have the highest concentrations of minerals with selections highest in manganese, phosphorus, and selenium. The grains einkorn, emmer, and durum showed significantly the highest level of zinc and elevated levels of potassium, boron, and copper compared to the other groups.

In standard monoculture varieties of wheat, all plants are almost identical. In population wheats, all plants are genetically distinct. This brings great diversity within the crop and the field. It means if one variety fails, there will still be a crop.

Wakelyns in East Anglia were the pioneers of YQ (Yield and Quality) wheat. YQ was bred by making 190 crosses among 20 different parent varieties – 19 modern wheats and one old wheat, Maris Widgeon – and mixing all the resulting seeds. With this increased genetic diversity making more efficient use of soil nutrients and water, lowering plant disease and pest levels.

Populations are now grown across the UK. Many of the techniques used for heritage grains work well for the YQ wheats.

Heritage Grains are not a challenge

The UK Grain Lab gathering took place in May this year. It is an annual meeting of farmers, millers, plant breeders, bakers, cooks, scientists and academics providing an opportunity to bake together, eat, drink, learn from each other and talk about the future. I was lucky enough to be there.

I focused on the practical demos. I was keen to learn more about how to use these wheats. Heritage wheats make beautiful bread, but may need a different approach.We are becoming more familiar with grains such as spelt, einkorn, emmer, rye but not specific varieties of wheats.

In one demo from Elmore Mountain Bread three different wheats were compared. After mixing the dough was folded in the usual way. Strength developed quite quickly in two of the doughs, but the third though seemed reluctant. Eventually it came together. It was worth it, as this turned out to be the tastiest of breads.

Emmer is similar to einkorn and spelt in that it retains its hull . It’s closely related to durum wheat and has been grown in Italy for a very long time. I’d not baked with emmer flour before, Rene van der Veer from Veldkucken Bakery in the Netherlands shared his techniques – showing how easy it is to use not just in bread but stollen and even panettone. It has has since become one of my favourites not only in bread but cakes and pastry.

Rye is well known for its flavour, but loaves can be very dense in heavy. I was most taken by Laura Valli from Estonia who works at the Bread Lab in Washington. She introduced us to her mother’s recipe making rye bread without any clear weights! Her description of the mix ‘Squeaking” when its sufficiently mixed is something I won’t forget. This mix was left over night before kneading the following day. The resulting bread is remarkably light. You can see all the process on youtube.

Filo pastry is a challenge at the best of times. And made with heritage wheat? Is that possible? Yes! Red Lammas was used by the bakers at Flor to create the thinest sheets possible transformed into a beautiful baklava. Although I tasted the final baklava when baked, I failed to take a photo!

The team from Wakelyns Bakery were there. They have introduced a UK wholegrain tin loaf made with YQ and Q population and Edgar wheat. It’s usually mixed in a machine and at the conference the mix got a bit sticky, so I had a go! 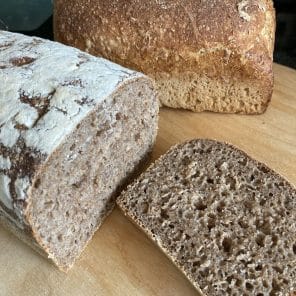 Danielle Ellis
My loaf uses Red Lammas flour. You can swap this for Emmer or Einkorn if you cannot find a single wheat variety. I'd not suggest using rye for this recipe This recipe has 50% heritage flour, 50% white bread flour if you prefer, use 75% white flour, 25% heritage flour. This recipe uses yeast and some sourdough starter if you have some. The starter is used for flavour in this case. Omit if you do not have any. Soaking (autolysing) the flour will make it easier to knead. A final tip, I find this loaf needs baking longer than usual. Placing two balls of dough in the tin enables and even bake. Do test that the internal temperature has reached 95°C
Print Recipe Pin Recipe
Prep Time 1 hr
Cook Time 40 mins
Fridge Rest 12 hrs
Course Bread
Cuisine British

Get to Grips with Heritage Wheats

Time to experiment! It is relatively easy to buy single variety wheats online, some are suggested below.

Where to buy heritage flour

This is not an exhaustive list. I welcome other suggestions:

Shipton Mill – A very large range of organic and stoneground flours used by many artisan bakers. Home bakers are very well catered for too with the Flour Direct Service.

Matthews Flour – A wide range of own brand flours some from local wheats. There’s a good range of flour available. Join their free club for discounts off your flours.

Gilchesters is located two miles north of Hadrian’s wall where they grow wheat and mill it.

Hodmedods YQ and other wheats and grains.

Sharpham Park are known for their range of spelt flours.

(1) The Science and Nutrition of Flavor

Small Food Bakery in Nottingham have gathered a wonderful series of information on their involvement with Wakelyns which is well worth exploring.