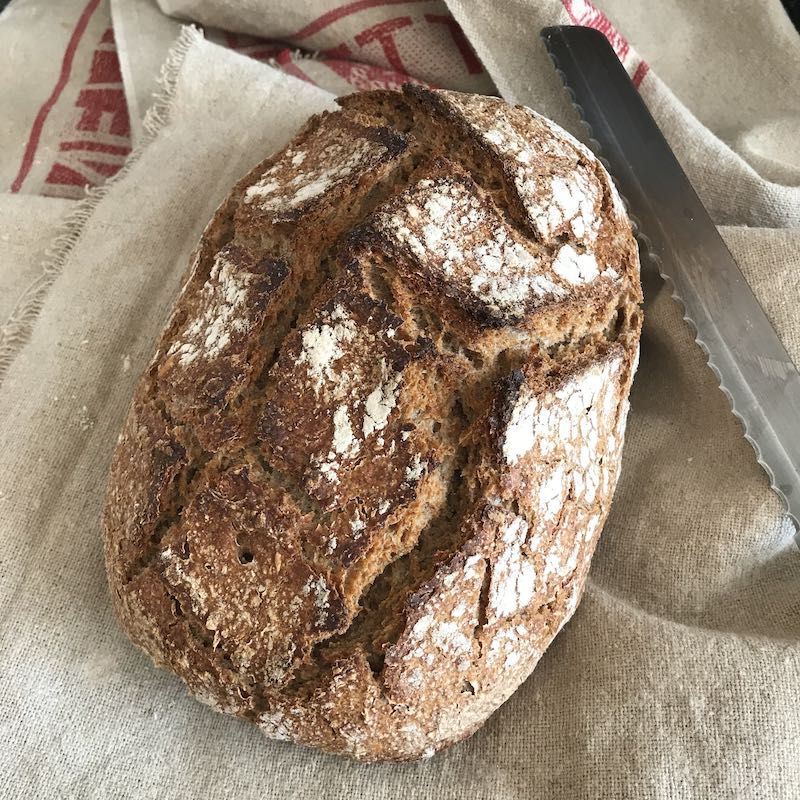 What is bread flour?

If you are buying bread flour, where do you source it from? Do you know what flour to look for? Choosing the right flour will make all the difference.

When making bread, a flour high in gluten will be easier to work with and the dough will be elastic and  easy-to-handle dough. If you look at the flour shelves in a supermarket, you’ll see bread flours (hard wheat), labelled strong or bread flour and pastry flours (soft wheat). Pastry flours have less protein and less gluten and should be used only for cakes and biscuits.

Most strong bread flour available in supermarkets contains a percentage of Canadian wheat which naturally has higher protein. Very strong bread flour might have only Canadian flour. Today, 60% of flour produced in the UK is used in the manufacture of bread products, with the remaining 40% used in a huge diversity of food products (1).

Discover French Bread Flour and how it is categorised.

Where to buy bread flour

There are around 50 flour mills that operate commercially in the United Kingdom of all sizes. The four largest companies account for approximately 65% of UK flour production (2)!

Medium sized mills often mill flour on behalf of well-known brand names as well as producing their own ranges. Many smaller mills have found particular niches for example Charlcote Mill near Stratford upon Avon who grind their wholemeal extra finely to provide chapatti flour to an eager local audience.

It’s easier than ever to source flour locally. In the South West of England, I am within relatively easy reach of a number of mills which I can highly recommend.  It’s pretty easy to buy direct from the mill online.

Shipton Mill – A very large range of organic and stoneground flours used by many artisan bakers. Home bakers are very well catered for too with the Flour Direct Service.

Charlcote Mill – Stoneground wholewheat and white flour. Deliveries are made to the local area only.

FWP Matthews – A wide range of own brand flours some from local wheats. There’s a good range of flour available. Join their free club for discounts off your flours.

Talgarth Mill – Stoneground wholewheat flour, some from wheat grown just 7 miles from the mill. Lovely cafe and visits to see the mill in action. Shop on site and sold through local outlets.

Wessex Mill – Set in the heart of Wantage, Wessex Mill produce a range of flours from wheat grown within 50 miles of the mill. Good mail order service.

Gilchesters is located two miles north of Hadrian’s wall where they grow wheat and mill it.

Sharpham Park are known for their range of spelt flours.

Hodmedods sell the amazing YQ flour developed by Wakelyns. This is a very special mix of wheats with a fascinating story. The flavour is outstanding

Mills supplying flour in the South West of England

Click on the locations on the map to find out more including website addresses. This is not an exhaustive list, but includes mills I have visited.

In many cases, you can easily order online directly with the mill or through a distributor such as Bakery Bits.

French flour which I think essential for some French breads is also increasingly easy to source. See my post on French Flour for more information.

What flour to use?

Once you start baking, you’ll end up experimenting, I am sure. Here’s a starting guide.

In my classes, we always start off with white bread flour. It’s the most forgiving. Once you’ve practiced and feel confident to move to the next stage, you have such a wonderful choice. You can then experiment and find a flour and taste that you really love.

Organic flour is made from wheat that is grown organically and may or may not be stoneground.

I’d suggest trying 50:50 white and wholewheat flour to begin with. If you go for 100% wholemeal flour it will give you a more dense loaf. Whatever percentage of wholewheat flour you use, it benefits from pre-soaking or autolysing before you knead it so it can absorb the water.

Look out for 85% wholewheat flour, often called brown flour for a lighter texture.

Rye flour is available as both Light Rye and Wholemeal Rye. I use Light Rye to provide plenty of flavour without the heaviness.

Increasingly, older varieties of wheat are becoming available including spelt, emmer and einkorn. In Scotland for example, wheats that grow well in the Scottish climate have been reintroduced and are now growing successfully. Successful trials are taking place overseas in Denmark and Maine either reintroducing grains that used to be grown in those areas, or experimenting with grains grown in similar climates in other parts of the world. It’s a fascinating subject!

It is becoming easier to buy heritage flour grown in Britain. Check out Hodmedods YQ Flour and Shipton Mill Heritage Flour range including flour grown close to the mill.

Note: Flours, including organic, may contain ascorbic acid (vitamin C) The Real Bread Campaign consider Ascorbic Acid an additive and loaves made containing this are not considered “Real Bread”. Ascorbic acid can: Strengthened gluten; give greater volume, finer crumb, and reduce crust thickness. Many mills produce flour without ascorbic acid. Check the list of ingredients before you buy.

Back in the 1880s, a new machine was invented, the roller mill. Up to that point, all bread flour was stone ground. Mills were mainly driven by water or wind power and later electricity. The demand for white loaves of bread grew and mills using stones to grind wheat could not keep up. Not only was it difficult to make white flour using the stone grinding method, it was slow.

Roller mills could process wheat more quickly and in larger quantities. I pictured a roller mill as one machine, but in fact a roller mill is a series of machines that cleverly shave the grain in layers process, making finer and finer flour, separating the bran. Curiously though, for wholemeal flour, bran is mixed back into the white flour.

For stone ground flour, the millstones are spaced apart according to the fineness required and all the grain is used. For white flour, the flour is fed through a sifting machine and the bran separated.

It is easy to assume that most of the grain used in mills back in the 1880s was British. It wasn’t. Bread wheat was imported mainly from the USA and Canada. Reading newspaper reports from the time, there are many complaints about the amount imported and the costs!

Join one of my breadmaking courses, there’s plenty to choose from. In the meantime, check out my recipe for heritage wheat bread

This article is one of my series Bake Better Bread